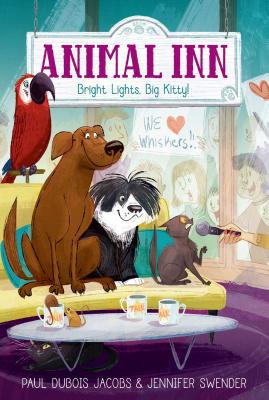 Whiskers goes viral in this fourth zany novel in a chapter book series where the fur—and fun—flies at an animal spa and hotel.

The Animal Inn is an all-inclusive pet resort/hotel/center/spa for animals from dogs to rabbits, cats to ducks, parrots to lizards. From doggie and kitty daycare, to grooming, and group play—you name it, and the Animal Inn has it.

The Inn is run by the Tyler family along with their pets Leopold, the Macaw; Fuzzy and Furry, the gerbils; dogs Dash and Coco; felines Shadow and Whiskers; and a rollicking horde of animal visitors.

When Whiskers becomes an unexpected internet star after a hilarious post becomes an online sensation, Whiskers and the Tylers are invited to NYC for a morning TV show interview. The Tylers rent an RV and take the whole family for the fur-tastic experience. Even though Whiskers is a bit full of himself with his newly found internet fame, he’s also super nervous! Will his fame translate to the TV screen—or is he destined to stay a meme forever?

Stephanie Laberis is a freelance illustrator and character designer for animation. Originally from New England, she now lives in Northern California with her wonderful partner, a couple of felines, and a handful of rodents. Her love for art is rivaled only by her love for animals, and she spends her spare time as a volunteer wildlife rehabber. She loves painting, needle felting, and losing herself in a good video game.
or
Buy Here
Copyright © 2020 American Booksellers Association