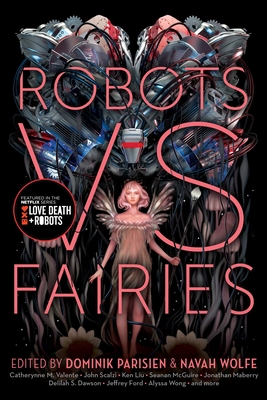 A unique anthology of all-new stories that challenges authors to throw down the gauntlet in an epic genre battle and demands an answer to the age-old question: Who is more awesome—robots or fairies?

Rampaging robots! Tricksy fairies! Facing off for the first time in an epic genre death match!

People love pitting two awesome things against each other. Robots vs. Fairies is an anthology that pitches genre against genre, science fiction against fantasy, through an epic battle of two icons.

On one side, robots continue to be the classic sci-fi phenomenon in literature and media, from Asimov to WALL-E, from Philip K. Dick to Terminator. On the other, fairies are the beloved icons and unquestionable rulers of fantastic fiction, from Tinkerbell to Tam Lin, from True Blood to Once Upon a Time. Both have proven to be infinitely fun, flexible, and challenging. But when you pit them against each other, which side will triumph as the greatest genre symbol of all time?

There can only be one…or can there?

Featuring an incredible line-up of authors including John Scalzi, Catherynne M. Valente, Ken Liu, Max Gladstone, Alyssa Wong, Jonathan Maberry, and many more, Robots vs. Fairies will take you on a glitterbombed journey of a techno-fantasy mash-up across genres.

Praise For Robots vs. Fairies…

“The all-original stories collected here provide a lively cross-section of current science-fiction and fantasy writers… It's a cliche to say there's something for everyone here, but in this surprisingly eclectic anthology there probably is.”
— The Chicago Tribune

"These lively, action-packed, and emotional tales by the best writers in sf/fantasy allow readers to root for their favorite team or discover new pleasures in an unfamiliar genre...Exceptional storytelling and well-paced writing make this volume a total delight."

“An impressive roster of contributors… a highly enjoyable collection of tales.”
— Locus Magazine

"Robots v. Fairies is a perfect mix of wonder and humor, technology and magic, with a touch of darkness here and there to ground us in the truths behind the myths and invention, and it’s sure to appeal to fans of both genres."

"An essential collection of stories exploring the eternal conflict between magic and technology...Themes both humorous and serious, delivered by the best in the business. Robots and fairies battle on, and the only winners are SFF readers."
— B&N SciFi & Fantasy Blog

"A fun mash-up of sci-fi and fantasy."
— GeedDad.com

"Like those oft-told tales of old, The Starlit Wood is a volume readers will want to return to often, and it deserves a place on every bookshelf left wanting a touch of the magical...For fairy tale aficionados, this volume is a must-read; for those interested in sampling the work of some of the best short fiction writers in sci-fi and fantasy today, it is no less essential."
— Tor.com, on THE STARLIT WOOD

"An incredible, genre-blurring collection of retold fairy tales, featuring well-published luminaries and up-and-coming voices...Like those oft-told tales of old, The Starlit Wood is a volume readers will want to return to often, and it deserves a place on every bookshelf left wanting a touch of the magical."
— Barnes & Noble Sci-Fi & Fantasy Blog, on THE STARLIT WOOD

"Robots vs Fairies is the creature feature you didn’t know you wanted.”
— The Washington Post

Navah Wolfe is a Hugo Award–nominated editor at Saga Press and the coeditor of The Starlit Wood: New Fairy Tales and Mythic Dream, along with Dominik Parisien. She was previously an editor at Simon & Schuster Books for Young Readers, where she worked on many bestselling books, including some that have won awards such as the Printz Honor, The Pura Belpré Award, The Pen/Faulkner Award, The Stonewall Award, the Lambda Literary Award, and the Schneider Family Award.
Loading...
or support indie stores by buying on