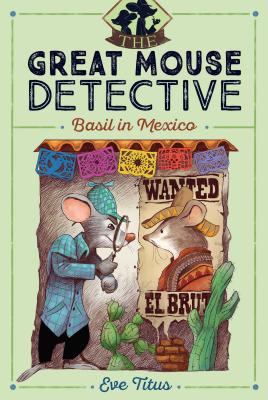 Named one of “13 Detective Book Series You Obsessed over as a Kid” by Buzzfeed.com and the inspiration for a hit Disney film, the masterful Great Mouse Detective is back and travelling to Mexico to solve three thrilling mysteries!

Basil—the famous sleuth of mousedom—has learned a great deal living in Sherlock Holmes’s cellar. Now, his sleuthing skills are being put to the test on a wild trip to Mexico! First, mousedom becomes frantic as mice are cracking their teeth on phony cheese made of concrete. Can he find a way to stop whoever is making the counterfeit cheese? Then, he must ferret out the truth when a beloved masterpiece—the Mousa Lisa—goes missing. And finally, Basil must track down the culprit when Dr. Dawson, Basil’s faithful friend and companion, is mousenapped! In each of these daring adventures, Basil proves himself to be a true disciple of his hero, Sherlock Holmes!

Paul Galdone (1907–1986) illustrated hundreds of children’s books, including the Basil of Baker Street series and the Anatole books, which received Caldecott Honors. He was posthumously awarded the 1996 Kerlan Award for his contribution to children’s literature.
or support indie stores by buying on
Copyright © 2020 American Booksellers Association