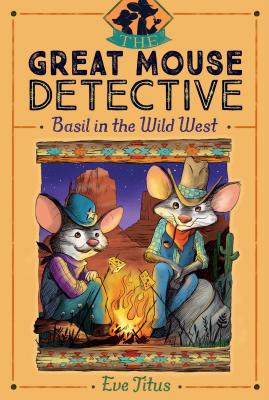 Basil in the Wild West (The Great Mouse Detective #4)

Named one of “13 Detective Book Series You Obsessed Over as a Kid” by Buzzfeed.com and the inspiration for a hit Disney film, the masterful Great Mouse Detective is back and tackling America’s most ruthless outlaws in the Wild West!

In this case of the smiling smugglers, Basil is off to the Wild West. But this time the Sherlock Holmes of the mouse world takes on the Big Cheeses of American mouse crime!

Basil’s first stop is New Mexico, where a notorious gang of smiling smugglers is holed up with their ruthless leader, JJ, who is trying to set up his own superstate with the profits from his ill-gotten gains!

Then, Basil heads to the Grand Canyon, to solve the mystery of “The Thing” that is terrifying guests at The Hathaway Hotel. Basil’s number-one suspect is Monterey Jack, one of America’s Most Wanted mouse outlaws, a wily and dangerous foe! Basil, his faithful companion Dr. Dawson, and their loyal pony from CLOPS (Cheese Lovers Official Pony Service) take off for the burning desert chase. Everyone calls it Mission Impossible. Has the genius detective finally met his match?