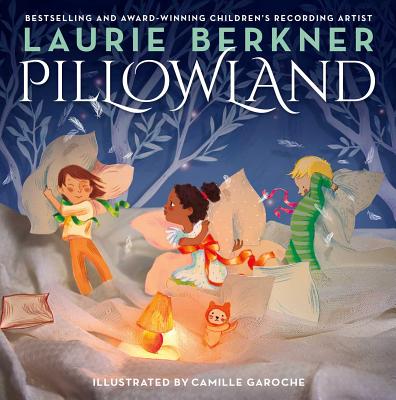 Laurie Berkner, “the queen of children’s music” (People), pairs the lyrics of her beloved hit with Camille Garoche’s gentle illustrations in this winning bedtime picture book—a must-have for fans of Laurie’s music and all things soft and sweet.

I know a place, a kingdom far away,
where people wear pajamas every night and every day.
Where all the houses, the buildings, and the trees
are made of fluffy pillows that are soft as they can be.

We’re going to land in Pillowland!

"Children’s musician Berkner (We Are the Dinosaurs) brings another of her popular songs to the page, this time serving up a cozy lullaby adventure.... Garoche (The Snow Rabbit) portrays the children’s whimsical journey in diorama-style scenes featuring cut-paper characters, objects, and buildings; the technique gives the children the look of paper dolls, and fabric elements bring the softness the fantasy setting demands. Sheet music appears on the back cover for families looking to making readings a musical affair."
— Publishers Weekly, October 2017

"A creative picture book interpretation of Berkner’s “Pillowland” song that follows three small children on a fantastic bedtime adventure.... The simple yet magical text with the detailed and comforting illustrations make this a phenomenal bedtime book or even an enjoyable read-aloud choice for a more sedate storytime. The chorus of the song incorporates some excellent sound effects (“fly a magic pillow plane, zoom zoom!”), and Garoche’s mixed-media illustrations incorporate cut paper, cloth, and light in intricate and magical assemblies. The lighting is especially marvelous with a few spreads featuring a soft warm glow that seems to come from within the paper creations. VERDICT: A recommended purchase for most collections, especially those looking to expand their musical or bedtime story shelves."
— School Library Journal, November 2017

Camille Garoche studied at the École des Beaux-Arts de Cergy and the Maryse Eloy. Her 3-D, cut-paper illustrations have been exhibited throughout Europe. She is the author-illustrator of Fox’s Garden and The Snow Rabbit. Camille lives in Paris with her partner and two daughters. Visit her online at PrincesseCamCam.Tumblr.com.
Loading...
or support indie stores by buying on