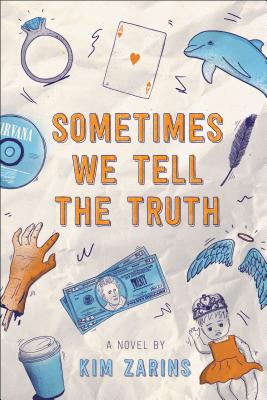 Sometimes We Tell the Truth

In this contemporary retelling of The Canterbury Tales, a group of teens on a bus ride to Washington, DC, each tell a story—some fantastical, some realistic, some downright scandalous—in pursuit of the ultimate prize: a perfect score.

Jeff boards the bus for the Civics class trip to Washington, DC, with a few things on his mind:
-Six hours trapped with his classmates sounds like a disaster waiting to happen.
-He somehow ended up sitting next to his ex-best friend, who he hasn’t spoken to in years.
-He still feels guilty for the major part he played in pranking his teacher, and the trip’s chaperone, Mr. Bailey.
-And his best friend Cannon, never one to be trusted and banned from the trip, has something “big” planned for DC.

But Mr. Bailey has an idea to keep everyone in line: each person on the bus is going to have the chance to tell a story. It can be fact or fiction, realistic or fantastical, dark or funny or sad. It doesn’t matter. Each person gets a story, and whoever tells the best one will get an automatic A in the class.

But in the middle of all the storytelling, with secrets and confessions coming out, Jeff only has one thing on his mind—can he live up to the super successful story published in the school newspaper weeks ago that convinced everyone that he was someone smart, someone special, and someone with something to say.

In her debut novel, Kim Zarins breathes new life into Chaucer’s The Canterbury Tales in a fresh and contemporary retelling that explores the dark realities of high school, and the subtle moments that bring us all together.

Praise For Sometimes We Tell the Truth…

In Sometimes We Tell the Truth (S. & S., Sept. 2016; Gr 10 Up), an update of Geoffrey Chaucer’s The Canterbury Tales, 21 field trip–bound high school seniors load onto a yellow bus for the six-hour journey from Canterbury, CT, to Washington, DC. In order to keep the calm en route, Mr. Bailey challenges his charges to a storytelling competition—fantasy, fiction, based-in-truth, or whatever—and whoever tells the best story earns a free A in civics. Would-be author Jeff, constrained by easily triggered asthma as well as social insecurities, serves as narrator, while obsessing about his own turn (he recently published a story in the school literary journal that earned him accolades—even from the popular kids—and hasn’t been able to write a word since) and his proximity to Pard (once best friends, the two have been estranged for years, and Pard came out of the closet sophomore year, and suddenly Jeff just can’t stop thinking about him in unexpected ways). Like the original characters, Kim Zarins’s cast represent a cross-section of society and are drawn with rather broad strokes, and their stories and interactions cleverly echo, reinterpret, and allude to the source material (an appended list pairs contemporary individuals with their 14th-century predecessors). These tales reference other works of literature (classics and current young adult fare) and often unwind with bawdy content, raucous language, and scandalous sex scenes. Whether zombie war epic, love story between an angel and a devil, or “Harry Potter” fan fiction, the tales entertain and elucidate, bestowing upon Jeff and his classmates the ability to see into, empathize with, and possibly understand the lives of others as well as their own. --Joy Fleishhacker
— School Library Journal

Kim Zarins has a PhD in English from Cornell University and teaches medieval literature at Sacramento State University. When she isn’t reading, writing, or teaching, she hangs out with her family in Davis, California, and coaxes a scrub jay named Joe to take peanuts from her hand.
Loading...
or
Not Currently Available for Direct Purchase