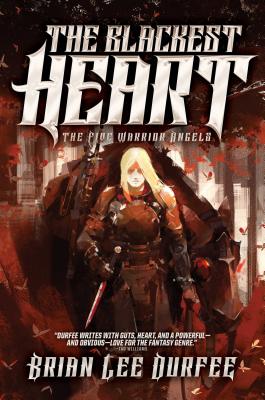 Gladiator. Assassin. Thief. Princess. And the Slave. The Five Warrior Angels have been revealed, one by one the mystical weapons they once wielded are being found, and an ancient prophecy is finally being fulfilled.

Or is it? For when it comes to recorded history, much is intended to manipulate and deceive.

Returning to the kingdom of Gul Kana, Princess Jondralyn has suffered a devastating loss, discovering that not all prophecy is to be assumed, not all scripture to be trusted. At the same time, her younger sister, Tala, has found faith within herself while facing off against villains, who are using her for their devices.

Hawkwood, the former Bloodwood Assassin, is captured. And the knight, Gault, betrayed by the Angel Prince, can only wonder of the fate of his daughter who has fallen into terrible hands.

All while Nail embarks upon the deadliest quest the Five Isles has ever known.

Brian Lee Durfee is an artist and writer raised in Fairbanks, Alaska, and Monroe, Utah. He has done illustrations for Wizards of the Coast, Tolkien Enterprises, Dungeons & Dragons, Humane Society Wildlife Land Trust (Denali National Park), and many more. His art has been featured in SPECTRUM: Best in Contemporary Fantastic Art #3 and L. Ron Hubbard Writers of the Future Vol 9. He won the Arts for the Parks Grand Canyon Award and has a painting in the permanent collection of the Grand Canyon Visitors Center-Kolb Gallery. Brian has written one epic horror novel along with the fantasy series, Five Warrior Angels. He lives in Salt Lake City.

Praise For The Blackest Heart (The Five Warrior Angels #2)…

"Durfee’s...cinematic shifts of perspective and his artist’s eye for shades of atmosphere propel this enormous tapestry of human frailties and will keep fans of dark fantasy turning the many, many pages."
— -- Publishers Weekly
or support indie stores by buying on
Copyright © 2020 American Booksellers Association