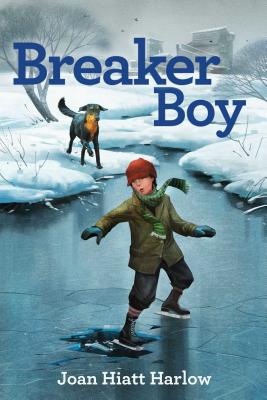 It’s 1911 in Pennsylvania coal country, and Corey must work at the mines to help support his family in this exciting historical novel.

Corey is just eleven years old, but his family needs him to chip in. He’s dropped out of school and works as a breaker boy picking out coal impurities from bins in the coalmines of Pennsylvania.

But after skating accident nearly kills Corey, he begins having panic attacks and nightmares. Corey turns to Mrs. Chudzik, a strange and mysterious local recluse, for help. She’s a trained doctor and Corey’s overwhelming fear of tight spaces means he is jeopardizing his family’s future.

When there is a disaster at the mine, trapping his father and other miners, Corey knows it’s time to face his fear. He and Mrs. Chudzik’s hound, Hovi, must find the trapped miners and bring help. But how can he when the thought of being in the dark and enclosed space might be more than Corey can handle?

Joan Hiatt Harlow is the author of several popular historical novels including Secret of the Night Ponies, Shadows on the Sea, Midnight Rider, Star in the Storm, Joshua’s Song, Thunder from the Sea, and Breaker Boy. Ms. Harlow lives in Venice, Florida. For more information, visit her at JoanHiattHarlow.com.
or
Not Currently Available for Direct Purchase
Copyright © 2020 American Booksellers Association