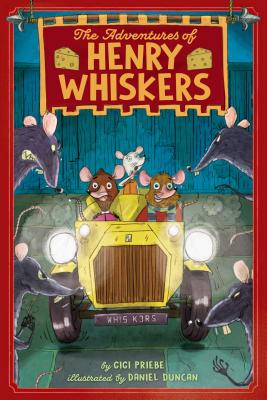 The Adventures of Henry Whiskers

Henry Whiskers must face his fears and rescue his little sister from the scary Rat Alley in this fun, fast-paced debut chapter book set in Queen Mary’s historical dollhouse at Windsor Castle.

Twenty-five generations of Whiskers have lived in Windsor Castle’s most famous exhibit: Queen Mary’s Dollhouse. For young, book-loving Henry Whiskers and his family, this is the perfect place to call home.

But when the dollhouse undergoes unexpected repairs and Henry’s youngest sister, Isabel, goes missing, he risks everything in a whisker-whipping race against time to save her. His rescue mission will take him to the murky and scary world of Rat Alley, and Henry will have to dig deep and find the courage he never knew he had in order to bring his sister back home.

Gigi Priebe is the mother of three, the founder of Stepping Stones, an award-winning children’s museum in Norwalk, Connecticut and the author of The Adventures of Henry Whiskers, the first in her middle grade series. When she is not writing¾or rewriting¾she is a philanthropic advisor and community volunteer in Fairfield County, Connecticut, where she lives with her husband, a cat named Tigger, a dog named Clover, and probably some mice.

Daniel Duncan is an illustrator living in the UK who creates most of his work in an old stable turned studio. His work takes inspiration from cinema, old photos, and sports. Duncan graduated from Middlesex University with First Class Honours, and a bachelor’s degree in illustration. He was highly commended by Macmillan for the 2013 Children’s Book Competition, as well as being shortlisted for the 2014 AOI awards for the Children’s Books New Talent category.
Loading...
or
Not Currently Available for Direct Purchase