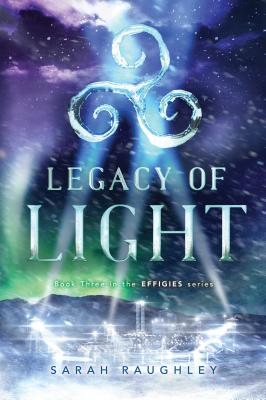 Legacy of Light (The Effigies #3)

The Effigies must uncover the connection between Saul, Blackwell, and the Phantoms before it’s too late in this epic conclusion to the Effigies trilogy.

The world is in chaos.

After Saul’s strike on Oslo—one seemingly led by Maia herself—the Effigies’ reputation is in shambles. Now they’re being hunted by nations across the globe, grouped in with the very terrorists they’ve been trying to stop.

With Maia’s resurrected twin, June, carrying out vicious attacks across the world, everyone believes Maia is a killer. Belle has gone rogue, Chae Rin and Lake have disappeared, and the Sect is being dismantled and replaced by a terrifying new world order helmed by Blackwell. As for Saul, his ultimate plan still remains a mystery.

And Maia? No one has seen or heard from her in weeks.

It’s all somehow connected—Saul, Phantoms, the Effigies, everything. But if the Effigies can’t put the pieces together soon, there may not be much left of the world they’ve fought so desperately to save.