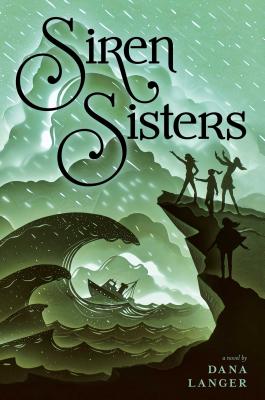 A soon-to-be siren finds herself responsible for the lives of her sisters—and the fisherman they curse—in this haunting debut novel.

Now that I know the truth, I sometimes picture my sisters in headlights, the way they would have looked on that cold February night, armed with shovels and pickaxes, and digging in the graveyard.

Lolly Salt has beautiful sisters. When they’re not in school or running their small town’s diner, they’re secretly luring ships to their doom from the cliffs of Starbridge Cove, Maine. With beautiful voices that twelve-year-old Lolly has yet to grow into (not that she wants to anyway) the Salt sisters do the work mandated by the Sea Witch, a glamorously frightening figure determined to keep the girls under her control. With their mother dead after a terrible car crash, and their father drowning in his grief, the sisters carry on with their lives and duties…until a local sea captain gets suspicious about the shipwrecks.

On the day before her birthday, Lolly watches in helpless horror as her sisters are lured themselves by curse-reversing fishermen—and suddenly it’s up to her and her best friend Jason to rescue the sirens of Starbridge Cove.

Despite the serious subject matter, the characters are likable and the story proceeds with a light touch. VERDICT Beautifully written and vividly told, this is an excellent choice for thoughtful readers and a vehicle for classroom discussion.
— School Library Journal, Starred

Purposeful messages for inclusion and against stereotyping are scattered throughout. Touching on family relationships, grieving, growing up, first romance, and Norse mythology, this is an exciting fantasy with a heart-stopping ending by an author to watch.
— Kirkus Reviews

Though not a typical coming-of-age story, the author still manages to weave in the concerns every young girl faces in a touching and poignant way. This is a wonderful new fantasy story sure to please.
— School Library Connection March/April

Dana Langer holds a BA in creative writing from Brandeis University where she received the Dafna Zamarripa-Gesundheit Fiction Prize. She lives in New York City with her husband and daughter and works as a high school English teacher. Siren Sisters is her first novel. Check her out online at MonstersinLit.Blogspot.com and on Twitter @DanicaLanger.
Loading...
or
Not Currently Available for Direct Purchase