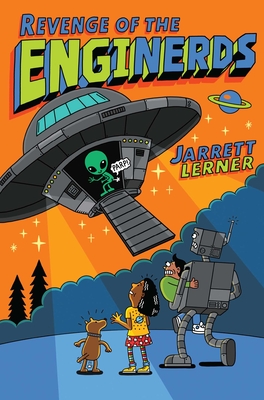 Revenge of the EngiNerds (MAX)

Ken and his EngiNerds crew return in a new, nutty and nerdy adventure that’s the perfect follow-up to EngiNerds.

When last we met, the EngiNerds were battling a horde of ravenous robots, but in this latest caper, they’re on the hunt for just one rogue robot. But who knows what kind of mayhem one mechanical creature can cause? And why is Ken the only EngiNerd who’s worried about the runaway robot?

The rest of the crew seems be missing in action and Ken fears it's because of Mikaela Harrington. She's the new girl in town who’s UFO and alien-obsessed and wants to join the EngiNerds. But as far as Ken is concerned, the EngiNerds are Y-chromosome only, no X’s allowed!

Will Ken allow a rogue robot and a know-it-all, genius girl to wreak havoc on the entire universe? He just might not have a choice!

Jarrett Lerner is the award-winning creator of more than a dozen books for kids, including the EngiNerds series of middle grade novels, the Geeger the Robot series of early chapter books, the Hunger Heroes series of graphic novel chapter books, two activity books, the illustrated novel in verse A Work in Progress, and the Nat the Cat series of early readers. You can find him online at JarrettLerner.com and on Twitter and Instagram at @Jarrett_Lerner. He lives with his wife and daughters in Massachusetts.
Loading...
or support indie stores by buying on