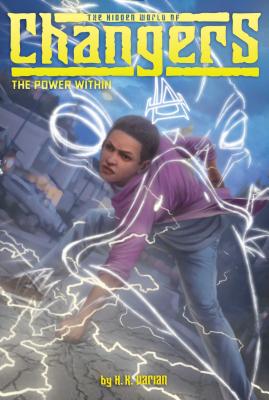 The Power Within (The Hidden World of Changers #3)

Darren receives a mysterious bracelet that helps him control his lightning abilities in the third action-packed novel of The Hidden World of Changers series!

Darren, Fiona, Mack, and Gabriella are Changers, a magical line of shapeshifters that can transform into mythological creatures, from werewolves and selkies to lightning birds and spirit foxes. They still have a lot to learn when it comes to their powers, but the kids are finally showing some progress fighting as a team, and the First Four think they’re ready for a new mission. Young Changers in the area have been mysteriously disappearing, and it’s up to the kids to figure out who—or what—is behind it. But ever since his parents announced their divorce, Darren has been having a rough time coping…and his lightning abilities are going haywire.

Just when Darren is about to lose control completely, he receives a mysterious bracelet—a bracelet that keeps his powers in check and makes him feel more in control than ever before. But after Mack and Fiona discover that one of the missing Changers had the same bracelet, they begin to wonder just who is helping Darren…or if the bracelet is meant to help him at all.

H.K. Varian has always loved reading about ancient mythology, ruins, and magic. Though H.K. once dreamed of having awesome powers like in Changers, writing became kind of like magic in and of itself. Today H.K. lives, writes, and has adventures in Pittsburgh, though most of them don’t involve battling warlocks, storming castles, or retrieving enchanted objects.
Loading...
or support indie stores by buying on