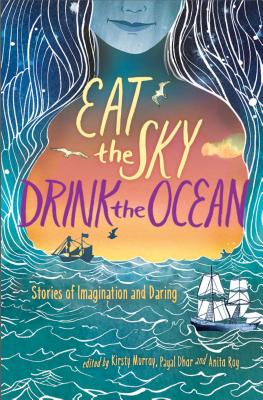 Eat the Sky, Drink the Ocean

These are just a few of the stories told in Eat the Sky, Drink the Ocean, a feminist speculative fiction collection, born of a collaboration between Australian and Indian writers. Finding themselves inspired to action after crimes against women dominated national conversations, the editors of this collection paired writers and illustrators from India and Australia together to write stories, graphic novels, and even a play that reimagine what girls can be and see themselves as.

The results are stunning. Some of the authors worked together, some wrote stories along a similar theme, but all seventeen stories blend magical realism and self-confidence in a powerful and inspiring way.

Praise For Eat the Sky, Drink the Ocean…

"A great way to introduce readers to women whose longer works may become future favorites."
— Booklist

* "There is, at the core, a brilliant theme of connection, as the writing of these stories required effort and collaboration across significant physical distance, and the works themselves reflect over and over how together is better, more powerful, more meaningful, and even more rebellious than alone."
— BCCB, Starred Review

Kirsty Murray eats too much chocolate but finds it helps her write. It seems to work as she’s written twelve novels, many short stories, articles, nonfiction books, and millions of emails. Kirsty has been an Asialink Literature Resident at the University of Madras and writer-in-residence at the University of Himachal Pradesh. In 2012 she participated in the Bookwallah Roving Writers Festival and presented at literary events across India. Visit her online at KirstyMurray.com.

Payal Dhar’s flights of fancy help her seek out new life and new civilization in her novels for youngsters. She has written seven books and numerous short stories for both big and little people. She’s also a freelance editor and writer, and writes about computers and technology, books and reading, games, and anything else that catches her interest. Visit her online at Writeside.net.

Anita Roy is a writer, editor, and columnist with more than twenty-five years of publishing experience in the UK and India. Her stories and nonfiction essays have appeared in a number of anthologies, and she regularly reviews and writes for newspapers and magazines. She has completed her first children’s novel, Dead School. Visit her online at AnitaRoy.net.
Loading...
or support indie stores by buying on