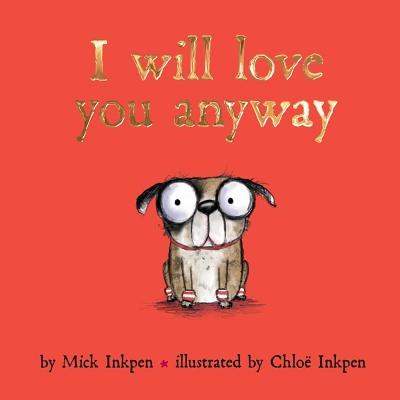 I Will Love You Anyway

The author of the beloved Kipper series teams up with his daughter to tell the heartwarming story of a sweat-band-wearing pug who just can’t seem to do the right thing.

Dog is very badly behaved—he destroys everything, chases cars, rolls in poo, and won’t stop running away! But when he finds himself lost and alone there is one person he knows he can always count on.

Mick Inkpen is one of today’s most popular picture book author/illustrators and the famous creator of both Kipper and Wibbly Pig. Mick has won the Children’s Book Award for Threadbear and the British Book Award twice, for Penguin Small and Lullabyhullaballoo. Kipper won a BAFTA for Best Animated Film in 1998. It wasn’t until Mick became a father that he began his career in children’s books. Now father and daughter have come together for a unique and exciting picture book partnership.

Chloë Inkpen grew up surrounded by picture books and has a natural gift for storytelling. A love of language and art saw her swap an English course for a degree in illustration, graphics, and photography at the Glasgow School of Art. She spent her final year specializing in children’s book illustration and was awarded second place in the Macmillan Prize for Illustration.
Loading...
or support indie stores by buying on
(This book is on backorder)