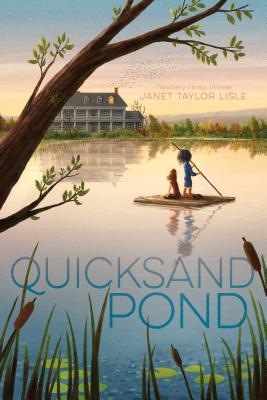 An ALA Notable Book
A Kirkus Reviews Best Book of 2017

Newbery Honor winner Janet Taylor Lisle’s novel about a pivotal summer in two girls’ lives explores the convictions we form, the judgments we make, and the values we hold.

The pond is called Quicksand Pond.

It’s a shadowy, hidden place, full of chirping, shrieking, croaking life. It’s where, legend has it, people disappear. It’s where scrappy Terri Carr lives with her no-good family. And it’s where twelve-year-old Jessie Kettel is reluctantly spending her summer vacation.

Jessie meets Terri on a raft out in the water, and the two become fast friends. On Quicksand Pond, Jessie and Terri can be lost to the outside world—lost until they want to be found. But a tragedy that occurred many decades ago has had lingering effects on this sleepy town, and especially on Terri Carr. And the more Jessie learns, the more she begins to question her new friendship—and herself.

A Kirkus Reviews Best Books of 2017

"One false accusation, tossed like a stone into a pond, creates a ripple effect that damages a family for generations. This story, so beautifully and tenderly told, will wrap you in its wings from the first page to the last. Don’t expect the flight to be smooth.”
— Kathi Appelt, Newbery Honor-winning author of The Underneath

*STARRED REVIEW* "Deftly navigating a diverse array of socioeconomic statuses and the discriminatory nature of the justice system, Newbery Honor-winner Lisle crafts a stirring story that raises crucial questions about the assumptions we make, the distances we keep, and the vulnerable voices we often fail to hear. As Lisle details Terri's determination to cease a vicious cycle, Henrietta's resolve to remedy an unjust past, and Jessie's aching ambivalence between the cautionary advice of others and her own hard-won revelations, readers are sure to listen. Striking, enigmatic, and haunting all around."
— Booklist, February 2017, starred review

"Lisle deftly balances the stories of Jessie’s coming of age, Terri’s downward spiral, and the truth behind the murder; the eventual coalescence of the three involves a simple but surprising twist, leaving readers with a compelling, but still melancholy, ending. The girls’ relationship is realistic in its ups and downs, with Jessie initially craving the attention of her coolly aloof new friend and then Terri desperately clinging to Jessie as things go awry. The focus occasionally shifts from the girls to the old woman who was involved in the long-ago crime, and her perspective gives the story both an air of mystery and an element of aching sorrow. A tale of how one summer, one person, or one event can forever change the direction of a life, this will appeal to readers who prefer their beach reads thoughtful rather than frothy."
— The Bulletin of the Center for Children’s Books, March 2017

"The author’s writing, as always, is filled with rich imagery and atmospheric descriptions. Readers will come away feeling as if they have visited the locale themselves. VERDICT: This complex tale is aptly bittersweet and invites reflection about justice, judgment, and loyalty. A strong purchase for fans of layered, realistic mysteries and drama."
— School Library Journal, March 2017

"Echoing the themes and tone of Lisle’s Newbery Honor–winning Afternoon of the Elves, this loss-of-innocence novel traces the delicate friendship built between two girls from different backgrounds.... With characteristic subtlety and enormous compassion, Lisle expresses complex family and social conflicts while showing how Jessie’s understanding of the world and her newfound friend expand, even as the views of those around her remain narrow. Terri’s struggle against oppression and prejudice will have as profound an impact on readers as it does on Jessie."
— Publishers Weekly, March 2017

"Quicksand Pond by Janet Taylor Lisle (Newbery Honor Book Afternoon of the Elves; The Art of Keeping Cool) is a beautiful, realistic story about trust, self-doubt and judgment."
— Shelf Awareness, May 19, 2017

“Provides a realistic view of social differences and cultural perceptions, serving as a foundation for deep discussions about their influences on individuals. The book will appeal to curriculum needs and those seeking a fun adventure. Recommended.”
— School Library Connection

Janet Taylor Lisle’s books for young readers have received the Newbery Honor Award (Afternoon of the Elves), the Scott O’Dell Award for Historical Fiction (The Art of Keeping Cool), Holland’s Zilveren Griffel, and Italy’s Premio Andersen Award, among other honors. A graduate of Smith College and former journalist, Janet lives in Rhode Island and often draws on Rhode Island history in her work. Visit her online at JanetTaylorLisle.com.
Loading...
or
Not Currently Available for Direct Purchase