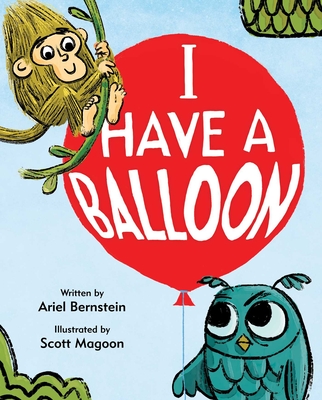 I Have a Balloon

“An owl and a monkey confront jealousy, the fickleness of want, and the influence of other perspectives in this high-energy story.” —Publishers Weekly (starred review)

“A definite purchase that will be checked out again and again.” —School Library Journal

Owl has a balloon. Monkey does not. What will happen next? Hint: this is not a book about sharing.

Owl has a red balloon. Monkey does not. “That red balloon matches my shiny red tie,” says Monkey. “I’d look fancy walking to school with a shiny red balloon. The only thing I’ve ever wanted, since right now, is a shiny, big red balloon. It would make me SO HAPPY!” But Owl does not want to give it to him. So Monkey tries to find something that Owl wants: a teddy bear, a robot, a picture of TEN balloons. Owl does not want any of these things. But then, Monkey offers him…a sock!

Hmmmmm…Owl is intrigued. Will he trade his shiny red balloon with Monkey?

Praise For I Have a Balloon…

Bernstein's debut featuring an owl holding a balloon begins with a spoiler alert on the jacket flap: "This is NOT a book about sharing."It is, however, an honest, humorous depiction of how one might cling to or covet possessions—behaviors that both children and adults will recognize. The story starts simply. Sitting on a branch in the woods, Owl proclaims the titular sentence to a nearby monkey. As the primate offers observations, the owl incorporates the adjectives into longer declarations: "That is a shiny red balloon," says the monkey. "I have a shiny red balloon," Owl agrees. Desperate to have the object, Monkey zooms through the pages offering trades, but neither the teddy bear, sunflower, robot, ball, etc., do the trick. Magoon's digital caricatures provide the emotional content that will elicit identification and laughter. His funky monkey and staid owl are entertaining foils, and the would-be trader's pratfalls recall Warner Bros. cartoons. It is ultimately a star-studded sock with a hole in it that gives Owl pause. Here there is more text as each character imagines wearing the sock on different body parts and using it for puppet performances. Then it is Owl who turns on the charm to no avail. They are each left with the metaphorical shoe on the other foot, until a raccoon wielding an ice cream cone appears. With an open-ended, wordless conclusion inviting predictions and possibilities, this tightly paced narrative soars above its message-driven counterparts. (Picture book. 3-7)
— Kirkus, STARRED REVIEW

Entertaining and the ending is humorous. . . .  A definite purchase that will be checked out again and again.
— School Library Journal

An owl and a monkey confront jealousy, the fickleness of want, and the influence of other perspectives in this high-energy story from debut author Bernstein and illustrator Magoon (I Will Not Eat You). Swinging into the opening scene on a vine, Monkey is enraptured by the red balloon Owl is holding. Initially, Owl seems ambivalent about the balloon, but Monkey’s praise (“The only thing I’ve ever wanted, since right now, is a shiny, big red balloon”) leaves Owl unwilling to part with it, despite Monkey’s offers of a teddy bear, sunflower, and other items in exchange. But Monkey’s single “sock with a star and a perfectly shaped hole” piques Owl’s interest with its possibilities. Written entirely in dialogue, Bernstein’s story never diverts focus from the characters’ id-driven wants. Magoon’s digital illustrations slyly reflect the changing power structure—Monkey spends much of the book on the forest floor, looking up at Owl, but they swap positions when Monkey’s sock becomes the object of desire—while bringing big laughs through pratfalls and other physical comedy.
— Publishers Weekly *STARRED REVIEW

Ariel Bernstein is the author of I Have a Balloon (which received starred reviews from Publishers Weekly and Kirkus Reviews and was a Junior Library Guild Selection); Where Is My Balloon?, a Bank Street Best Book of the Year; and We Love Fishing!, which Publishers Weekly called “relatable and funny” in a starred review. She lives in New Jersey with her family. Learn more at ArielBernsteinBooks.com.

Scott Magoon has illustrated many critically-acclaimed picture books, including the New York Times bestselling Rescue & Jessica by Jessica Kensky and Patrick Downes, which also received a Schneider Family Book Award, Straw by Amy Krouse Rosenthal, and Misunderstood Shark by Ame Dyckman. He is the author-illustrator of Breathe, which was named a Kirkus Reviews Best Read Aloud and a Best Book of the Year by the HuffPost and Chicago Public Library. Scott lives in the Boston area with his wife and two sons. Visit him online at ScottMagoon.com.
Loading...
or
Not Currently Available for Direct Purchase