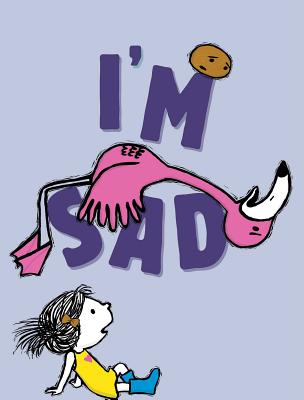 When Flamingo announces he’s feeling down, the little girl and Potato try to cheer him up, but nothing seems to work. Not even dirt! (Which usually works for Potato.)

Flamingo learns that he will not always feel this way. And his friends learn that sometimes being a friend means you don’t have to cheer someone up. You just have to stick by your pal no matter how they feel.

Even if they’re a potato.

[I]n I’m Sad, the funny and tender-hearted follow-up to 2012’s I’m Bored, a girl, a potato and a flamingo learn that sometimes, the only way to cope with negative feelings is by giving yourself the time and space to fully feel them.
— The Globe and Mail

Debbie Ridpath Ohi is the author of Where Are My Books?. Her illustrations also appear in Sea Monkey and Bob, written by Aaron Reynolds; I’m Bored (a New York Times Notable Book) and Naked!, written by Michael Ian Black; as well as ten Judy Blume chapter books and middle grade titles. For more info, visit DebbieOhi.com or @InkyElbows on Twitter.
or support indie stores by buying on