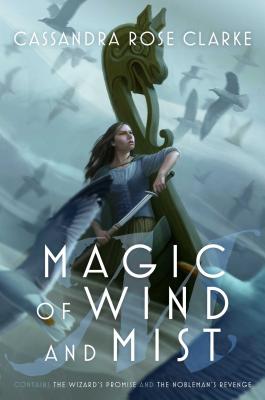 Magic of Wind and Mist

The Wizard's Promise; The Nobleman's Revenge

Taking place in the world of Cassandra Rose Clarke’s Magic of Blood and Sea, this is the story of a would-be witch who embarks on an adventure filled with intrigue, mystery, mermaids, and magic.

One day when Hanna is with her apprentice—a taciturn fisherman called Kolur—the boat is swept wildly off course during a day of storms and darkness. In this strange new land, Kolur hires a stranger to join the crew and, rather than heading home, sets a course for the dangerous island of Jadanvar. As Hanna meets a secretive merboy—and learns that Kolur has a deadly past—she soon realizes that wishing for adventures can be deadly…because those wishes might come true.

Praise For Magic of Wind and Mist: The Wizard's Promise; The Nobleman's Revenge…

* “Harkens back to the best in fantasy/adventure, offering rock-solid worldbuilding, satisfyingly perilous obstacles and a protagonist whose charismatic ’tude goes way beyond spunk.”
— Kirkus Reviews, starred review, on MAGIC OF BLOOD AND SEA

“Unique, heart-wrenching, full of mysteries and twists!”
— Tamora Pierce, author of the Song of the Lioness quartet, on MAGIC OF BLOOD AND SEA

"An enjoying, compelling read with a strong and competent narrator … a highly satisfying adventure.”
— SFX Magazine, on MAGIC OF BLOOD AND SEA

“Exciting and original...with magic, pirates, myth and adventure...will hook you in and keep you tugging on the line for the next book in Clarke’s series.”
— USA Today, on MAGIC OF BLOOD AND SEA

“Thrilling action combines with surprising character revelations in this satisfying sequel.”
— Kirkus Reviews, on MAGIC OF BLOOD AND SEA