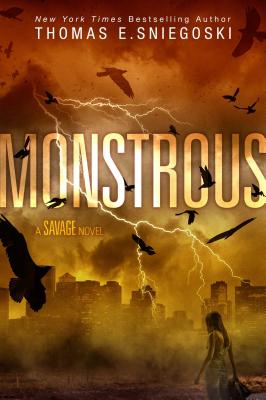 Sidney and her friends might have survived the storm that came to the small island of Benediction, but now the storm has reached Boston, and the city isn’t prepared for what’s coming in this sequel to the “unpredictable” (VOYA) and “fast-paced” (School Library Journal) Savage from New York Times bestselling author Thomas E. Sniegoski.

The horrors that began in Savage continue in Boston as Sydney and her friends work to protect the city from the newly crazed rampage of animals and try to figure out the origin of the storm and its power.

Thomas E. Sniegoski is the author of more than two dozen novels for adults, teens, and children. His books for teens include Legacy, Sleeper Code, Sleeper Agenda, and Force Majeure, as well as the series The Brimstone Network. As a comic book writer, Sniegoski’s work includes Stupid, Stupid Rat Tails, a prequel miniseries to international hit, Bone. Sniegoski collaborated with Bone creator Jeff Smith on the project, making him the only writer Smith has ever asked to work on those characters. He was born and raised in Massachusetts, where he still lives with his wife LeeAnne and their French Bulldog, Kirby. Visit him on the web at Sniegoski.com.
Loading...
or
Not Currently Available for Direct Purchase