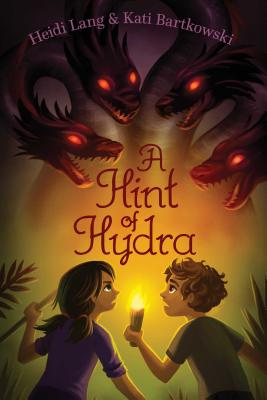 A Hint of Hydra (The Mystic Cooking Chronicles) (Paperback)

Thirteen-year-old chef Lailu Loganberry must stop a war between the elves and scientists in this follow-up to A Dash of Dragon, which Kirkus Reviews calls “a recipe for success.”

It’s the Week of Masks, a festival held to chase away evil spirits. But Lailu doesn’t have time to worry about demons. She has bigger fish to fry—or rather, griffons, now that she’s been asked to prepare a mystical feast for the king’s executioner, Lord Elister.

Unfortunately Lailu’s meal is overshadowed by the scientists’ latest invention: automatons, human-shaped machines that will respond to their masters’ every order. Most people are excited by the possibilities, but the mechanical men leave Lailu with a bad taste in her mouth.

Even worse, the elves still blame the scientists for the attacks on them weeks ago, and Lailu worries that the elves might be cooking up revenge. So when she and her sorta-rival-turned-almost-friend Greg stumble across the body of a scientist, the elves are the prime suspects. With help from Greg, her best friend Hannah, and the sneaky, winking spy Ryon, Lailu has to discover the truth behind the murder, and soon—because hostilities between the elves and the scientists are about to boil over faster than hydra stew.

And just ask any chef: war is bad for business.

Kati Bartkowski was originally drawn to illustration before she got swept up in the world of words. Nowadays she’s a fan of creating fantastical creatures and feisty heroines in both mediums. If she’s not reading, writing, or drawing, she’s probably chasing after her high energy little girl. She lives in northern California and is the coauthor of the Mystic Cooking Chronicles and Whispering Pines. Find her on Twitter @KTBartkowski, or visit the website she shares with her writing partner at HeidiandKatiWrite.com.

Praise For A Hint of Hydra (The Mystic Cooking Chronicles)…

"Lang’s gripping tale is chock-full of adventure and action."
— School Library Journal on A Hint of Hydra

"solving the magical whodunit and battling against steampunk-inspired automatons easily reinforce Lailu’s heroism and allow for an engaging, self-contained adventure."
— BCCB on A Hint of Hydra
or support indie stores by buying on
Copyright © 2020 American Booksellers Association