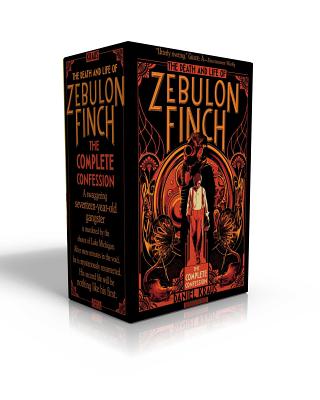 The Death and Life of Zebulon Finch -- The Complete Confession (Hardcover)

At the Edge of Empire; Empire Decayed

At the end of the twentieth century, seventeen-year-old Zebulon Finch is voluntarily being sealed into a tomb far beneath the World Trade Center. After a long, grueling journey across American history, he is determined to fade away into the darkness at last—but not before setting the record straight on his infamous “life” once and for all.

So he begins to write his story, starting in 1896—the year he was shot to death on a beach by a fellow Chicago gangster. Zebulon spent a mere twenty minutes in the void before waking up to find that his corpse still lived. After being swept into Lake Michigan, hooked by a fisherman, and sold to a traveling medicine show, he began to live a second life quite unlike the first.

As decade after decade passes, Zebulon slowly comes to understand the meaning of life even as everyone he knows succumbs to death—friends, enemies, and lovers alike. Grand, thrilling, heartbreaking, funny, and ambitious at every turn, The Death & Life of Zebulon Finch is not just one young man’s story. Rather, it is the story of America itself, the story of what it means to be human in a world so often lacking in humanity.