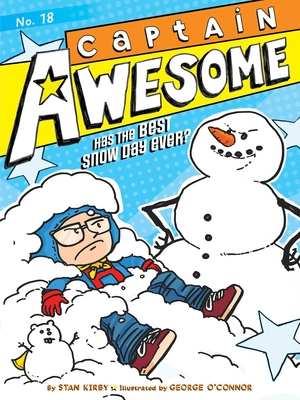 Captain Awesome Has the Best Snow Day Ever? (Paperback)

Captain Awesome is determined to make this the best snow day ever in the eighteenth adventure of the Sunnyview Superhero Squad!

Captain Awesome just woke up, and something is suspicious. His mom’s not calling him to come downstairs for breakfast. His school clothes aren’t laid out for him. He peeks out the window and gasps. He can barely see anything through the piles and piles of...snow! This can only mean one thing. SNOW DAY! And it’s going to be the greatest snow day ever! Or is it?

George O’Connor is the creator of the New York Times bestselling graphic novel series Olympians, in addition to serving as the illustrator of the Captain Awesome series. He is also the author and illustrator of the picture books Kapow!, Ker-splash, and If I Had a Triceratops. He resides in his secret Brooklyn, New York, hideout, where he uses his amazing artistic powers to strike fear in the hearts of bad guys everywhere!
or
Buy Here
Copyright © 2020 American Booksellers Association