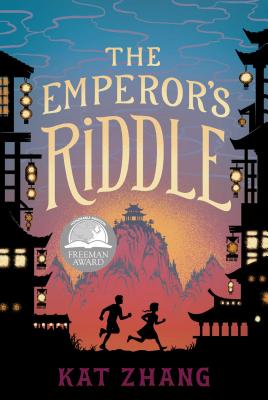 From acclaimed author Kat Zhang comes a “fast-paced mystery adventure” (BCCB) about a girl who embarks on a hunt for a long-lost treasure while on a summer trip to China.

Mia Chen is on what her mother calls a Grand Adventure. She’s not sure what to make of this family trip to China, and didn’t want to leave her friends for the summer, but she’s excited about the prospect of exploring with her Aunt Lin, the only adult who truly understands her.

Then Aunt Lin disappears, right after her old nemesis, a man named Ying, comes to visit. Mia knows that years ago, when Aunt Lin and Ying were sent to the Fuzhou countryside to work as laborers, the two searched for an ancient treasure together—one that still hasn’t been found. She’s suspicious that their shared history might be linked to Aunt Lin’s disappearance.

When Mia discovers an old map filled with riddles in Aunt Lin’s room, she quickly pieces together her mission: find the treasure, find her aunt. Now, Mia, along with her big brother, Jake, must solve the clues to rescue the person she knows best in the world—and maybe unearth a treasure greater than her wildest dreams.

Kat Zhang loves traveling to places both real and fictional—the former have better souvenirs, but the latter allow for dragons, so it’s a tough pick. A graduate of Vanderbilt University, she now spends her free time scribbling poetry, taking photographs, and climbing atop things she shouldn’t. You can learn about her travels, literary and otherwise, at KatZhangWriter.com.

Praise For The Emperor's Riddle…

Mia is excited to spend a month in China with her free-spirited aunt Lin (and her brother and mom), reconnecting with Chinese family and exploring the nearby areas. When an old acquaintance of her aunt’s comes around, asking odd questions about an ancient, missing treasure that he and her aunt used to search for, Mia is suspicious, and when her aunt goes missing the next day, Mia knows Lin is in danger. Fortunately, Mia’s got some clues about what might have happened, and her cleverness, paired with her brother’s reluctant but loyal help, helps her determine the location of the long sought after treasure and her missing aunt. There are a few too many lucky circumstances and discoveries that aid the kids, but they’re useful shortcuts toward a safe and satisfying conclusion for young readers, and there’s still plenty Mia must endure and uncover to make things right. The Chinese landscape is carefully described, and lush, reverent passages about statues, temples, and cultural details sneak atmosphere into the fast-paced mystery adventure. A quiet note about what Mia has been underappreciating in her mother because of her adoration of her aunt is effectively made, and it will perhaps inspire readers to find hidden depths in those around them.
— BCCB
or support indie stores by buying on
Copyright © 2020 American Booksellers Association