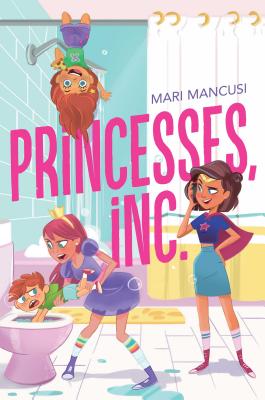 Twelve-year-old Hailey and her friends form a unique babysitter’s club in order to raise money to see their favorite YouTube star at a local ComicCon in this hilarious M!X novel.

Twelve-year-old Hailey and her BFFs are all big fans of Collin Prince, a YouTube star, and swoon-worthy crush. So when the opportunity to meet him at a local Comic-Con comes up, the girls jump at the chance. The problem? The convention isn’t cheap—and the girls don’t have the money to go. But Hailey isn’t ready to give up just yet. In addition to meeting Collin at the convention, there is a young writer’s competition that she is determined to enter—and win.

The girls dream up Princesses and Pirates, Inc., a babysitting service where the girls will dress up in costume to entertain their charges. Of course, they aren’t as prepared as they thought they would be to deal with bratty kids, scheming older siblings (who are less than thrilled that their own babysitting jobs have dried up), and trying to balance their new “jobs” with school. And more responsibilities means less time for Hailey to work on her contest entry. Will their plan to make it to Comic-Con pay off…or could their business end up as shipwrecked as the pirates they portray?

Mari Mancusi grew up in New England where she spent her winters snowboarding in the mountains of Vermont, New Hampshire, and Maine. Today she resides in Austin, Texas, with her husband and young daughter, writing snowy stories to stay cool. A graduate of Boston University and a former Emmy Award–winning TV news producer, Mari has written numerous books for children, teens, and adults. When not writing, she enjoys traveling, cosplay, watching horror movies, and her favorite guilty pleasure—video games.
Loading...
or
Not Currently Available for Direct Purchase