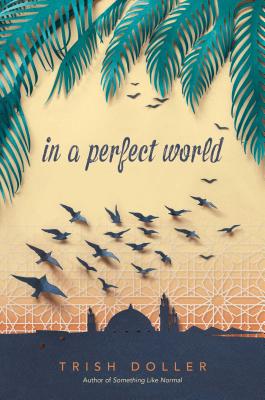 In a Perfect World

From critically acclaimed author Trish Doller comes a “tender story that’s both realistic and hopeful” (Publishers Weekly), set in Cairo, Egypt, about the barriers we tear down for the people and places we love most.

Caroline Kelly is excited to be spending her summer vacation working at the local amusement park with her best friend, exploring weird Ohio with her boyfriend, and attending soccer camp with the hope she’ll be her team’s captain in the fall.

But when Caroline’s mother is hired to open an eye clinic in Cairo, Egypt, Caroline’s plans are upended. Caroline is now expected to spend her summer and her senior year in a foreign country, away from her friends, her home, and everything she’s ever known.

With this move, Caroline predicts she’ll spend her time navigating crowded streets, eating unfamiliar food, and having terrible bouts of homesickness. But what she finds instead is a culture that surprises her, a city that astounds her, and a charming, unpredictable boy who challenges everything she thought she knew about life, love, and privilege.

Praise For In a Perfect World…

A white Catholic teen from Ohio spends her months in Cairo getting to know her gorgeous Egyptian driver while learning about social justice and international fellowship. When her mother gets the chance of a lifetime to open up a Doctors Without Borders-style eye clinic in Egypt, Caroline's both nervous and excited. She ignores dire warnings from her beloved-but-"racist" grandmother, who's convinced terrorists lurk around every corner. Cairo gains appeal when Caroline meets her driver, Adam, an aspiring chef who shows her a Cairo beyond stereotypes: not just pyramids, but churches, jerk chicken, and Egyptian reggae. At every opportunity Caroline muses on how Egypt resembles home: the call to prayer like church bells, Islam's attitude about dating resembling her grandmother's, the unmet promises of the Arab Spring compared to Ferguson. Adam and Caroline have much in common (they've both been sorted into Hufflepuff, for instance), but religion, class, and culture demand they stay apart. Caroline's awareness of the imperialist undertones of her relationship with Adam doesn't make her stop loving him, and they both struggle to do what's right. There's a place for unsubtle messaging about white Americans learning to see humanity in the Muslim world, and Caroline—with her likable tattooed father and her mouthwatering descriptions of food—is a pleasant vehicle for the lesson. Pair with Aisha Saeed's Written in the Stars (2013) for an insider point of view of Islam. (Fiction. 12-16)
— Kirkus Reviews

A romance meets travel novel in this work that takes readers from the suburbs of Ohio to the bustling streets of Cairo. Caroline’s summer plans get an unexpected detour when her mother is hired to open an eye clinic in Egypt. Caroline and her family uproot and move across the globe. Teens will be able to taste the koshary and feel the tension as Caroline navigates the streets of Cairo as a young blonde woman, subjected to, at times, street harassment and angry remarks. The teen meets Adam, the handsome son of the family driver, and he quickly helps her adjust to Egyptian and Muslim customs. The story isn’t devoid of the Westerners as saviors trope, but the author attempts to portray the Muslim characters in a sympathetic and evenhanded way. When Caroline is accosted in the street by a catcaller, she explains the situation to Adam, who offers a compassionate response. His family is presented with tenderness. Doller describes Caroline’s relatives who “watch Fox News” as having rigid views of Muslims, and the protagonist makes comparisons between the Muslim and Christian faiths. The plot moves along, pushing Adam and Caroline together, and a union is foreshadowed fairly early on. The story is light yet touches on timely topics without feeling bogged down or too didactic. The narrative is told through Caroline’s point of view, and the language and style feel authentic. Readers will connect with Caroline’s experiences in a distinct and fascinating place, and the heated romance simmers. Fans of romance set in far-off places will not be disappointed. VERDICT A great addition to any library collection, especially where Gayle Forman’s Just One Day is popular.–¬Christina Vortia, Wesley Chapel, FL
— School Library Journal

Instead of enjoying her senior year of high school in Ohio, Caroline Kelly unexpectedly moves to Cairo, “where the government is not super-stable and the fear of terrorism is real,” so her mother can fulfill a dream of opening an eye clinic in “Garbage City,” home to Cairo’s most impoverished inhabitants. A practicing Catholic, Caroline is eager to learn about Islam and Egyptian culture, but she struggles to adjust to the crowded urban environment, the mosque’s predawn calls to prayer, the fact that she needs a driver to take her around the city, and frequent sexual harassment. A growing friendship with her driver’s teenage children, Adam and Aya, helps her acclimate, and things look up when she discovers that her crush on Adam is mutual. With humor, sensitivity, and empathy, Doller (The Devil You Know) conveys the complexities of an interfaith, intercultural romance: the blatant disapproval from Adam’s family and friends, her parents’ worry (“The kind thing to do would be to leave him alone”), and Adam’s own doubts. It’s a tender story that’s both realistic and hopeful.
— Publishers Weekly

The summer before her senior year in high school, Caroline’s family moves from Sandusky, Ohio, to Cairo, Egypt, where her mom will run an eye clinic for the poor. It takes Caroline time to adjust to the new rules and culture (long pants and tunics rather than cutoffs and tanks; a driver to take her everywhere) and the language, but as she makes friends, she falls in love with both the city and a boy. Just as Caroline is finding her place in her new world, her mom’s clinic is bombed and Caroline’s time in Cairo, as well as the story, comes to an end shortly after.

Doller paints a vivid picture of an expat-teen’s life in Cairo: part fascination, part fear, and a little bit of guilt. With detailed descriptions of popular and less familiar tourist spots; mouthwatering descriptions of Koshary, ful, Gebna makleyah, and other foods; and a bit of Egyptian Arabic, this is the perfect tour guide disguised as a YA novel. The straight forward story—a teen falls in love with a new city and a boy—belies the important lessons learned in this story. The theme of the novel is not subtle: Egyptians are different from Americans, but they are also similar; people who are different are also similar. Caroline blushes when she catches herself making assumptions: why would she think that Egyptians would not enjoy reggae, heavy metal, and Harry Potter?  The reader learns, through identifying with Egyptian culture and people and with Caroline’s expanding perspectives, to examine their own filters through which they see “others.” This book is a quick read which will inspire discussions, travel, and perhaps a bit of empathic understanding about people who are different from the reader.—Beth Karpas.
— VOYA

Caroline planned on spending the summer before her senior year of high school at soccer camp with her best friend and roving around Ohio with her boyfriend. Instead, she is forced to confront the unfamiliar, as well as her own assumptions and privilege, when her mother accepts a job at a global health organization in Cairo, Egypt, for a year. Reluctant at first, Caroline comes to marvel at Cairo’s colorful, vivid sunsets and rich history, especially when her family’s driver falls ill and his son, Adam, becomes her guide. Doller (Something like Normal, 2012) subtly builds suspense and carefully crafts romantic tension into every word shared between Caroline and Adam—no wonder they fall for each other despite Adam’s Muslim faith and his family’s warning that the relationship is haram (forbidden). The novel is ultimately told from an outsider’s perspective, but it questions and challenges stereotypes more often than it reinforces them. Together, Caroline and Adam go to great lengths fighting not only for each other but also for their dreams. — Caitlin Kling
— Booklist online

Trish Doller is the author of Something Like Normal, which was an ABA New Voices Pick and a finalist for NPR’s Best-Ever Teen Novels, among many other accolades; Where the Stars Still Shine; The Devil You Know; In a Perfect World; and Start Here. She has been a newspaper reporter, radio personality, and bookseller, and lives in Fort Myers, Florida, with a relentlessly optimistic Border Collie and a pirate.
Loading...
or
Not Currently Available for Direct Purchase