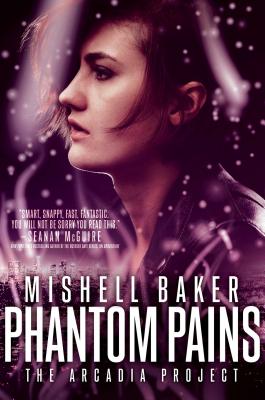 * "Everything readers think they know about both worlds will be upended by this enthralling installment."
— Library Journal, STARRED REVIEW

“Baker’s prose is a liquid line with light in it, that you can’t tell is gasoline until she touches it with a match…. Phantom Pains succeeds in being both seamlessly connected to Borderline and utterly its own ambitious project. I was constantly aware of being impressed with it while being absorbed by it – and I ended up loving it more than Borderline, which is saying something.”
— Lightspeed Magazine

Mishell Baker is the author of the Nebula and World Fantasy Award Finalist Borderline, which was also a Tiptree Honor book, as well as the second and third books in The Arcadia Project, Phantom Pains and Impostor Syndrome. She is a 2009 graduate of the Clarion Science Fiction and Fantasy Writers’ Workshop, and her short stories have appeared in Daily Science Fiction, Beneath Ceaseless Skies, Redstone Science Fiction, and Electric Velocipede. She has a website at MishellBaker.com and frequently Tweets about writing, parenthood, mental health, and assorted geekery at @MishellBaker. When she’s not attending conventions or going on wild research adventures, she lives in Los Angeles with her husband and children.
Loading...
or
Not Currently Available for Direct Purchase