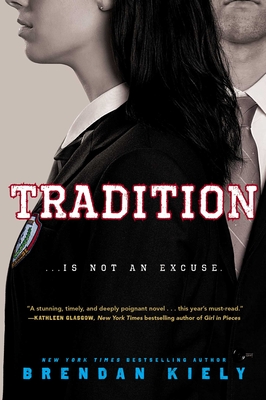 “Deeply felt, powerful, devastating and, ultimately, hopeful.” — Nicola Yoon, #1 New York Times bestselling author of Everything, Everything and The Sun Is Also a Star
“Powerful and necessary…an important, timely book.” —Amber Smith, New York Times bestselling author of The Way I Used to Be
“A story that belongs in every library.” —School Library Journal (starred review)
“A thoughtfully crafted argument for feminism and allyship.” —Kirkus Reviews

From New York Times bestselling and award-winning author Brendan Kiely, a stunning novel that explores the insidious nature of tradition at a prestigious boarding school.

Jules Devereux just wants to keep her head down, avoid distractions, and get into the right college, so she can leave Fullbrook and its old-boy social codes behind.

Jamie Baxter feels like an imposter at Fullbrook, but the hockey scholarship that got him in has given him a chance to escape his past and fulfill the dreams of his parents and coaches, whose mantra rings in his ears: Don’t disappoint us.

As Jules and Jamie’s lives intertwine, and the pressures to play by the rules and to keep the school’s toxic secrets, they are faced with a powerful choice: remain silent while others get hurt, or stand together against the ugly, sexist traditions of an institution that believes it can do no wrong.

“Tradition is a deeply felt, powerful, devastating and, ultimately, hopeful look at toxic rape culture and its destructive effects.”  --Nicola Yoon, #1 New York Times bestselling author of Everything, Everything and The Sun is Also a Star

"Powerful and necessary, Brendan Kiely bravely takes on class, privilege, and injustice in this layered, authentic story about friendship and finding the courage to stand up for what is right—Tradition is an important, timely book that will empower young men to rise up against misogyny and rape culture."  --Amber Smith, New York Times bestselling author of The Way I Used to Be

"Tradition is a startling portrait of privilege and rape culture, but it is also ultimately a book about resistance and hope, the power of friendship to embolden our integrity, and the courage to do the right thing even when everyone else seems to be doing wrong." --Amy Reed, author of The Nowhere Girls

“Tradition is a stunning, timely, and deeply poignant novel about the culture of sexual violence. Sure to spark necessary conversations, this is 2018's must-read young adult novel.” --Kathleen Glasgow, New York Times bestselling author of Girl in Pieces

"Tradition isn't so much a book as it is an invitation and a promise. An invitation to stand up for ourselves and for what's right, and a promise that if we stand, we won't do so alone.  Beautifully written with Brendan's wit and compassion, this book is a must read for all those hopeful for a better world." --Shaun David Hutchinson, author of the Florida Book Awards' Gold Medal and ALA's 2015 Rainbow Book List novel, The Five Stages of Andrew Brawley.

"Brendan Kiely’s Tradition is a searing literary call-to-arms in the most powerful and just sense: it takes a sledgehammer to our rotten, dangerous, and deeply ingrained traditions, so that we can build something new and beautiful in their place." --Jeff Zentner, author of the William C. Morris Award winning and Carnegie Medal longlisted The Serpent King and Goodbye Days

“The novel not only takes on rape culture within educational institutions, but condemns just about every sexist ideal we’re taught to accept”
— Culturess

* "A story that belongs in every library."
— School Library Journal, starred review

* “There is no doubt: this is an important book that all young adults should read.”
— VOYA, starred review

“Kiely bravely explores rape culture and how it intersects with class and privilege… readers will find themselves rooting for the world not as it is, but as it might yet be.” – Booklist

“This novel is a timely road map for those looking to find their places in this rapidly changing world… A thoughtfully crafted argument for feminism and allyship."
— Kirkus

“What Tradition demonstrates is that women finding the courage to speak up is only part of the equation; men have to listen and, more importantly, be willing to change.”
— Chicago Tribune

Brendan Kiely is the New York Times bestselling author of All American Boys (with Jason Reynolds), Tradition, The Last True Love Story, and The Gospel of Winter. His most recent book is The Other Talk: Reckoning with Our White Privilege. His work has been published in over a dozen languages, and has received the Coretta Scott King Author Honor Award, the Walter Dean Meyers Award, and ALA’s Top Ten Best Fiction for Young Adults. A former high school teacher, he is now on the faculty of the Solstice MFA Program. He watches too much basketball and reads too many books at the same time, but most importantly, he lives for and loves his wife and son. Find out more at BrendanKiely.com.
Loading...
or
Not Currently Available for Direct Purchase