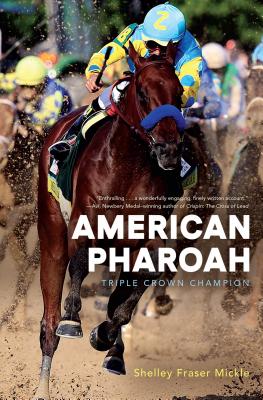 From the author of Barbaro comes the triumphant story of the 2015 Triple Crown and Breeders Cup winner, American Pharoah.

When American Pharoah won the American Triple Crown and the Breeders’ Cup Classic in 2015 he became the first horse to win the “Grand Slam” of American horse racing, by winning all four races. His story captured American’s imagination, and this inspired account will also feature the handlers who saw his promise: owner, Ahmed Zayat of Zayat Stables, trainer Bob Baffert, and jockey Victor Espinoza.

With American Pharoah, Shelley Mickle tells the story of this beloved horse’s life from birth to his historic achievement of becoming the twelfth Triple Crown winner.

Shelley Fraser Mickle is an award-winning author who has published over a dozen books, which, along with her commitment to literacy and the power of story, led to her being nominated to the Florida Women’s Hall of Fame in 2014. Her books have been New York Times Notables, Library Journal’s Best Adult Books and her nonfiction book, Barbaro: America’s Horse (2007) won a Bank Street Award. She lives on her ranch in Gainesville, Florida.
Loading...
or
Not Currently Available for Direct Purchase