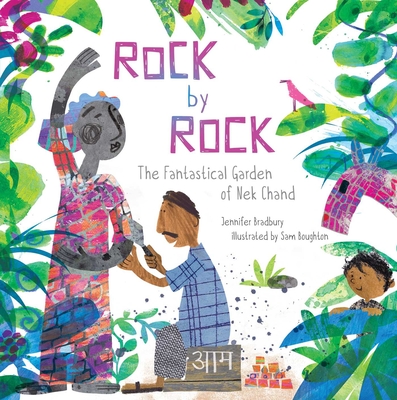 The Fantastical Garden of Nek Chand

This luminous picture book tells the fascinating true story of artist Nek Chand and how his secret art project—hidden away in a jungle—became one of India’s most treasured wonders, second only to the Taj Mahal.

Nek Chand’s incredible rock garden, built from stone and scraps and concrete, began as a way for him to express his long-felt grief at having to leave his boyhood village due to the violence caused by the partition of India. What began as a secret and personal (not to mention initially illegal) project became so much more, not only to Nek but to all of India.

Praise For Rock by Rock: The Fantastical Garden of Nek Chand…

A unique addition to a library's art and biography sections as well as being a great introduction to a found object art projects."
— School Library Connection

Jennifer Bradbury is the author of the middle grade novel River Runs Deep and of several critically acclaimed young adult novels, including A Moment Comes, Wrapped, and her debut, Shift—which Kirkus Reviews called “fresh, absorbing, compelling” in a starred review. Shift was picked as an ALA and a School Library Journal Best Book for Young Adults and is also on numerous state reading lists. A rock climber herself, she is also a teacher in Burlington, Washington, where she lives with her family.

Sam Boughton is an award-winning artist based in the UK. She graduated with a bachelor’s in illustration from Bristol UWE then went on to be awarded a distinction for her master’s in illustration from the Cambridge School of Art. In addition to holding solo exhibitions of her paintings, Sam illustrates and writes picture books. She works mainly in watercolor with an added element of collage. Visit her online at SamBoughton.co.uk.
Loading...
or support indie stores by buying on