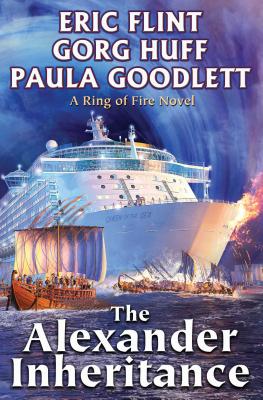 NEW TIME TRAVEL ALT. HISTORY FROM A MASTER: Flint's Ring of Fire and Boundary series have proved him to be a master of time travel alternate history. Here then, a new tale of persons displaced in time, fighting for their lives.

Twice before, mysterious cosmic catastrophes have sent portions of the Earth across space and back in time—first, with the Grantville Disaster in West Virginia, and then again with a maximum security prison in southern Illinois.

Now, the planet is struck with yet another such cataclysm, whose direct impact falls upon the Queen of the Sea, a cruise ship in the Caribbean. When the convulsions subside, the crew and passengers of the ship discover that they have arrived in a new and frightening world.

They are in the Mediterranean now, not the Caribbean. Still worse, they discover that the disaster has sent them more than two thousand years back in time. Following the advice of an historian among the passengers, Marie Easley, they sail to Egypt—or, at least, where they hope Egypt will be.

Sure enough, Egypt is there—ruled over by Ptolemy, the founder of the Ptolemaic dynasty and one of Alexander the Great’s chief generals.

Alexander the Great, it turns out, died just two years ago. The western world has just entered what would become known as the Hellenistic Period of history, during which time Greek civilization would spread around the Mediterranean and beyond. But the first fifty years of the Hellenistic Period was the Age of Diadochi—the Time of the Successors—when Alexander’s empire would collapse into chaos. By the time the Successors finished their strife, every single member of Alexander’s dynasty would be murdered and only three of the generals who began that civil war would still be alive.

That is the new world in which the Queen of the Sea finds itself. Can Marie Easley and Captain Lars Flodden guide the crew and passengers through this cataclysm? Fortunately, they have some help: a young Norwegian ship’s officer who forms an attachment to Alexander’s widow; a French officer who is a champion pistol marksman; a canny Congressman from Utah—and, most of all, many people of the time who are drawn to a vision of the better world of the future.

Paula Goodlett retired from the military as a non-commissioned officer in the early nineties. She broke her leg in 2003, which led to her browsing Baen's Bar lest she become bored during her enforced inactivity. Captivated by the 1632 universe concept, she began as a special assistant to Eric Flint. She eventually wrote a large important sequence of the storyline in 1634: The Ram Rebellion. She is editor of the Grantville Gazettes and chairs the 1632 Editorial Board. Additionally, Paula is assistant editor of the e-zine Jim Baen's Universe. Paula mainly writes in tandem with Gorg Huff.
Loading...
or support indie stores by buying on
(This book is on backorder)