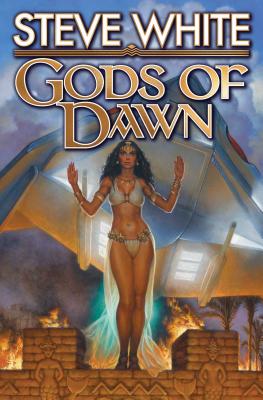 Book #6 in Steve White's exciting Jason Thanou series. Jason and his team from the Temporal Regulatory Authority must travel to late 20th century Earth to prevent a device that allows its user to see back in time from falling into the hands of the Transhumanist Underground. Jason Thanou has fought for the continued existence of humanity across the centuries. As a special operations officer of the Temporal Regulatory Authority, he's traveled though time to thwart the Transhumanists--genetically and mechanically enhanced beings that seek to destroy humanity--and their alien allies, the Teloi. But for all his work, the Transhumanist Underground has never been defeated. In possession of the same time travel technology as the Temporal Regulatory Authority, the Transhumanists have been busy planting "time bombs" throughout recorded history. Time bombs that are set to go off on The Day, when the secret history the Transhumanists have planted will be revealed, resulting in the overthrow of humanity. Now, Jason Thanou, along with fellow TRA agents Alexandre Mondrago and Father Julian Casinde, must travel through Earth's bloody history to ensure the survival of the human race. They'll find themselves in Italy, two days before the death of Pope John Paul I. Father Casinde has reason to believe that something much more sinister than a simple heart attack is behind the death of the Holy Father. Racing against--and through--time, Jason and his fellow officers must defeat the Transhumanists and their Teloi allies. Meanwhile, back in Jason's home time of the 24th century, The Day grows ever closer About? Gods of Dawn:
". . . a strong story . . . as the protagonists move incrementally toward a distant final showdown with their enemies."--Publishers Weekly About Soldiers Out of Time:
"Creative . . . White seamlessly inserts his characters into history, blending science fiction and vintage military action to deliver a fast-paced, high-stakes story. The time travel leads to a twisty, clever series of surprises and plot mechanics."--Publishers Weekly About Ghosts of Time:
"Meticulous research, vivid historical descriptions, and tense action sequences help flesh out this rousing time-travel adventure."--Publishers Weekly About Pirates of the Timestreams:
"White expertly blends historical and futuristic elements . . . to create a fast-paced, detail-rich tale, seamlessly inserting his own inventions into factual events . . . an exciting, engaging story, accessible to new readers and thoroughly satisfying for established fans."--Publishers Weekly About Steve White:
"White offers fast action and historically informed world-building."--Publishers Weekly About Steve White's Forge of the Titans:
". . . recalls the best of the John Campbell era of SF. White's core audience of hard SF fans will be pleased . . ."--Publishers Weekly ". . . Engaging entertainment . . . much suspense and many well-handled action scenes . . ."--Booklist The Jason Thanou Series:
Blood of Heroes
Sunset of the Gods
Pirates of the Timestream
Ghosts of Time
Soldiers Out of Time
The Gods of the Dawn

Steve White completed a tour of duty in Vietnam as a naval officer. With David Weber, he has collaborated on Insurrection, Crusade, In Death Ground, and the New York Times best seller The Shiva Option. His most recent books for Baen are the Jason Thanous Time Travel series books, including Blood of Heroes, Sunset of the Gods, Pirates of the Timestream, Ghosts of Time, and Soldier Out of Time.
Loading...
or
Not Currently Available for Direct Purchase