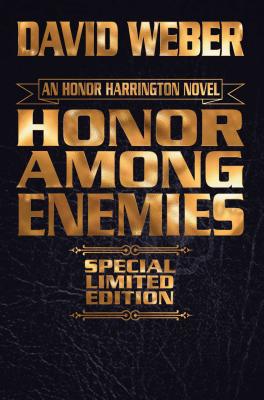 Limited signed leatherbound edition of Book 6 in the internationally best-selling Honor Harrington science fiction series. Limited Signed Leatherbound Edition KNOW THY ENEMY For Captain Honor Harrington, it's sometimes hard to know who the enemy really is. Despite political foes, professional jealousies, and the scandal which drove her into exile, she's been offered a chance to reclaim her career as an officer of the Royal Manticoran Navy. But there's a catch. She must assume command of a "squadron" of jury-rigged armed merchantmen with crew drawn from the dregs of her service and somehow stop the pirates who have taken advantage of the Havenite War to plunder the Star Kingdom's commerce. That would be hard enough, but some of the "pirates" aren't exactly what they seem . . . and neither are some of her "friends," For Honor has been carefully chosen for her mission--by two implacable and powerful enemies. The way they see it, either she stops the raiders or the raiders kill her . . . and either way, they win. About David Weber and the Honor Harrington series:
." . .everything you could want in a heroine.... Excellent ... plenty of action."--Science Fiction Age "Brilliant Brilliant Brilliant "--Anne McCaffrey "Compelling combat combined with engaging characters for a great space opera adventure."--Locus "Weber combines realistic, engaging characters with intelligent technological projection . . . Fans of this venerable space opera will rejoice . . ."--Publishers Weekly About Shadow of Freedom, #15 in the Honor Harrington series:
"This entry is just as exciting as Weber's initial offering. . . .The result is a fast-paced and action-packed story that follows our characters] as they move from reaction to command of the situation. Weber builds Shadow of Freedom to an exciting and unexpected climax."--Daily News of Galveston About Mission of Honor, #13 in the Honor Harrington series:
"Weber combines realistic, engaging characters with intelligent technological projection and a deep understanding of military bureaucracy in this long-awaited Honor Harrington novel ... Fans of this venerable space opera will rejoice to see Honor back in action."--Publishers Weekly "This latest Honor Harrington novel brings the saga to another crucial turning point ... Readers may feel confident that they will be Honored many more times and enjoy it every time."--Booklist Honor Harrington Main Series:
On Basilisk Station
The Honor of the Queen
The Short Victorious War
Field of Dishonor
Flag in Exile
Honor Among Enemies
In Enemy Hands
Echoes of Honor
Ashes of Victory
War of Honor
The Shadow of Saganami
At All Costs
Storm from the Shadows
Mission of Honor
A Rising Thunder
Shadow of Freedom

With over seven and a half million copies of his books in print and eighteen titles on the New York Times bestseller list, David Weber is the science fiction publishing phenomenon of the new millennium. In the hugely popular Honor Harrington series, the spirit of C.S. Forester's Horatio Hornblower and Patrick O'Brian's Master and Commander lives on--into the galactic future. Books in the Honor Harrington and Honorverse series have appeared on twenty-one bestseller lists, including those of The Wall Street Journal, The New York Times, and USA Today. While Weber is best known for his spirited, modern-minded space operas, he is also the creator of the Oath of Swords fantasy series and the Dahak saga, a science fiction and fantasy hybrid. Weber has also engaged in a steady stream of best-selling collaborations including his Starfire Series with Steve White, which produced the New York Times bestseller The Shiva Option, among others. Weber's collaboration with alternate history master Eric Flint led to the best-selling 1634: The Baltic War. His Honorverse collaborations with Flint in the Crown of Slave series are also highly popular, with latest entry, Cauldron of Ghosts, becoming a New York Times bestseller. His planetary adventure novels with military science fiction ace and multiple national best-selling author John Ringo includes March to the Stars and We Few. Finally, Weber's teaming with Linda Evans and Joelle Presby produced the Multiverse series, including latest entry, The Road to Hell. David Weber makes his home in South Carolina with his wife and children.
Loading...
or
Not Currently Available for Direct Purchase