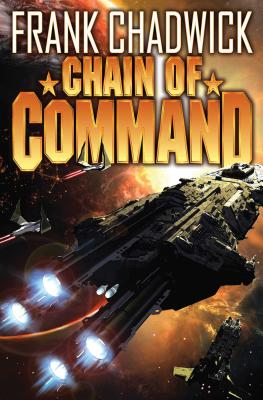 New Military SF from legendary game creator Frank Chadwick. Lieutenant Sam Bitka finds himself commanding a starship against an alien enemy who always seems one step ahead of him.

Lieutenant Sam Bitka, U.S. Naval Reserve, is getting used to civilian life when he is called back to active duty. Tensions between Earth and the alien Varoki are on the rise, and Sam is assiged as tactical officer aboard the deep space destroyer USS Puebla. Dispatched to the distant world of K'tok to protect human colonists, he wants nothing more than to serve out his active duty time and get back to his civilian life.

But when the Varoki launch a crippling surprise attack against the Earth coalition fleet, Sam finds himself suddenly in command of the USS Puebla, a job he is far from certain he can discharge successfully. What’s more, mounting evidence points to a much larger and more sinister alien plan.

Now, Sam must deal with faltering leadership in the human task force and an alien enemy who always seems one step ahead of them. Time for Sam to step up and rise to the challenge of command.

Praise for Chain of Command:

“Chadwick’s heavy hitter succeeds at teeth-gritting action scenes, deep psychological portraits of diverse characters and societies, and abundant puzzles and mysteries. All . . . mixed in seamlessly with the vivid tragedies of war and balanced with dark humor.”—Publishers Weekly (starred review)

"...strong characterization and the briskness of the plot should please. Fans of military sf and of Chadwick, in particular, should give it a look."—Booklist

"Chain of Command is very smartly put together… Chadwick gets the details right, whether he's talking about the effects of prolonged weightlessness or the intricacies of geo and interstellar politics and economics… a solid piece of Mil-SF writing that pulls from many historical sources and manages to convey a lot of what the Surface Navy is like…. it isn't the steel hulls that make the navy tough, it's the sailors that crew them."—SFRevue

About Come the Revolution:
“[A]dventure, family secrets and humor. . . . The plot is as hard as the science Chadwick uses. . . . [E]ngages readers. First-rate science fiction; it moves at a fast pace throughout.”—Daily News of Galveston County

"Chadwick offers an exciting military SF story set on the Varoki home planet of Hazz’Akato in his follow up to How Dark the World Becomes...Chadwick, a leading designer of military and science-fiction board- and role-playing games, knows his way around a battlefield...eccentric  cohorts are entertaining, and a few surprises guarantee that readers will be seeing more of this series."—Booklist

Frank Chadwick is the New York Times number one best-selling nonfiction author of over two hundred books, articles, and columns on military history and military affairs, as well as over one hundred military and science fiction board and role-playing games. His game Space: 1889 was the first Steampunk game and remains a cult favorite. His other game writing credits include legendary fantasy game En Garde!, groundbreaking SF role playing game Traveller: The New Era, and many others. Chadwick’s SF novels include Come the Revolution, How Dark the World Becomes and steampunk thriller The Forever Engine, all from Baen Books.
Loading...
or
Not Currently Available for Direct Purchase