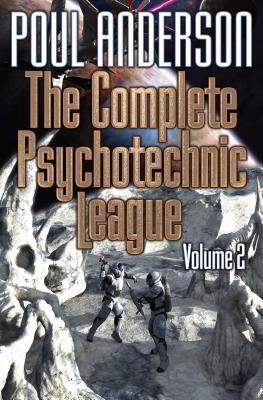 Volume two of three collecting ALL of the Psychotechnic League future history stories, from multiple Hugo- and Nebula-award-winning author Poul Anderson. After World War III ravages the globe, humanity, led by the Psychotechnic Institute, bands together to create peace on Earth and to spread that peace throughout the Solar System and beyond. But soon the cycle of war and destruction begins anew. Includes short stories never before collected in a Psychotechnic League volume FROM THE RAVAGES OF WAR, HOPE FOR A BRIGHTER TOMORROW After World War III has ravaged the globe and toppled once-great nations, a new science offers hope for the future: Psychodynamics, the ability to influence government and popular opinion. Led by the Psychotechnic Institute, humanity denounces its violent ways, once and for all. Peace reigns on Earth. Humankind shakes off the tyranny of gravity and ventures out into the galaxy. But no sooner is utopia realized than the cycle of war and destruction begins anew. The second of three volumes collecting all of multiple Hugo- and Nebula-Award winning author Poul Anderson's massive future history magnum opus. Includes short stories previously uncollected in a Psychotechnic League volume About Poul Anderson: "One of science fiction's authentic geniuses."-Chicago Sun-Times "Anderson fuses elegiac prose and a sweeping vision of man's technological future..."-Booklist "One of science fiction's giants."-Arthur C. Clarke.

Poul Anderson was one of the most prolific and popular writers in science fiction. He won the Hugo Award seven times and the Nebula Award three times, as well as the Grand Master Award of the Science Fiction Writers of America. With a degree in physics, and a wide knowledge of other fields of science, he was noted for building stories on a solid foundation of real science, as well as for being one of the most skilled creators of fast-paced adventure stories. He was author of over a hundred novels and story collections, and several hundred short stories, as well as several mysteries and nonfiction books.
Loading...
or
Not Currently Available for Direct Purchase