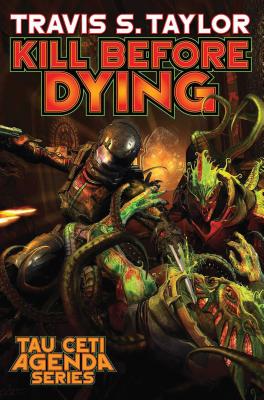 BOOK #5 IN THE BEST-SELLING TAU CETI AGENDA SERIES, SEQUEL TO TRAIL OF EVIL. Humanity takes to interstellar space to face conflict and an extermination threat from an evil artificial intelligence, and an alien menace from beyond.

General Alexander Moore has faced down an alien menace bent on the total destruction of the human race and lived to tell the tale. But his encounters with the Chiata were not without cost, and the fight is far from over. The Chiata are still out there, and they will stop at nothing short of complete annihilation.

Humankind is not the only species engaged in battle against the Chiata, and Alexander Moore receives a tip from an alien allied against their common enemy that there may be something on a planet in a far-flung star system that might give humanity an edge in the ongoing war.

Travis S. Taylor, Ph.D. is the co-creator and star of the National Geographic Channel’s hit series, Rocket City Rednecks and can be seen on the Weather Channel on 3 Scientists Walk into a Bar. Taylor is a physicist who has worked on various programs for the Department of Defense and NASA for the past twenty years. His expertise includes advanced propulsion concepts, very large space telescopes, space-based beamed energy systems, future combat technologies and next generation space launch concepts. Taylor is also the author of pulse-pounding, cutting edge science fiction with the Tau Ceti Agenda series including One Good Soldier, The Tau Ceti Agenda, One Day on Mars, and Trail of Evil, as well as his ground-breaking Warp Speed series, with entries Warp Speed and The Quantum Connection.
or
Not Currently Available for Direct Purchase
Copyright © 2020 American Booksellers Association