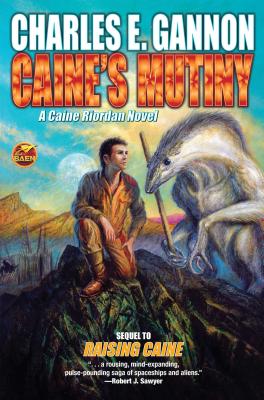 Caine Riordan, fresh from serving as envoy to the aliens known as the Slaasriithi, has been given yet another daunting task: apprehend raiders that are terrorizing a distant planet.

As difficulties mount, Caine becomes aware that the mission his superiors sent him to perform may not be the one they actually hope he will achieve. Which means Caine may be forced to choose between honoring a promise to friends or following orders—a choice that could ultimately put him in front of a board of inquiry. Or a firing squad.

"Chuck Gannon writes the kind of science fiction we all grew up on: rousing, mind-expanding, pulse-pounding sagas of spaceships and aliens.  He's a terrific writer, and we're lucky to have him."—Robert J. Sawyer, Hugo and Nebula award winning author of Quantum Night and Flashforward

Charles E. Gannon is the author of Compton Crook Award-winning, Nebula-nominated Fire with Fire, Trial by Fire, and Raising Caine in the Caine Riordan series. He is the coauthor with Eric Flint of 1636: The Papal Stakes and 1636: Commander Cantrell in the West Indies in Eric Flint's best-selling Ring of Fire series. With best seller Steve White, Gannon is the coauthor of Starfire series entries Extremis, Imperative, and Oblivion. Gannon is also the author of multiple short stories. He is a member of SIGMA, the “SF think tank,” which has advised various intelligence and defense agencies since the start of the millennium. A former professor, Gannon lives near Annapolis, Maryland, with his wife and children.
Loading...
or
Not Currently Available for Direct Purchase