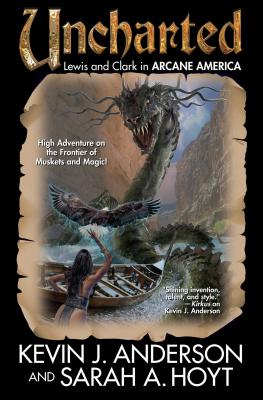 After Halley’s Comet was destroyed in a magical battle in 1759, the backlash separated the entire New World from the Old in an event known as The Sundering. Now isolated from the rest of the globe, America has become a very different place, where magic works and history has been changed forever.

It is 1803—a new 1803. Young Meriwether Lewis, footloose and intrigued, goes to hear a lecture in St. Louis by the venerated old wizard Benjamin Franklin. Franklin’s talk is disrupted by the attack of a winged fire-breathing beast, much like legends from Lewis’s own Welsh heritage. In the aftermath, Franklin tells the young man that he knows of a great, growing evil that lurks in the uncharted Arcane Territories west of the Mississippi.

Using his own vast fortune, Franklin commissions Lewis and his own talented partner William Clark to embark on a remarkable voyage of exploration, to meet and document the indigenous tribes, to find a route all the way to the Pacific Ocean—and perhaps beyond the magical veil to Europe again—and to stop the growing evil that is filling the American West.  For while the Sundering separated the rest of the world and granted the original colonists unexpected magical gifts, sorcery inspired by native legends has also been ignited. And the Arcane Territories may hold unparalleled dangers for the expedition, both natural and magical.