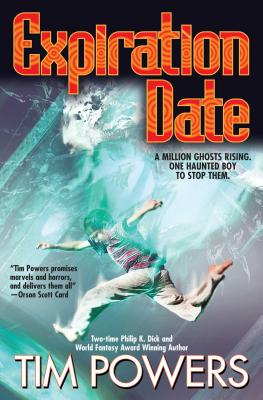 A heart-stopping supernatural adventure from one of fantasy fiction's most original talents--back in print Ghosts can be caught, and bottled, and sold by covert dealers to addicts who inhale the things--and when a young boy named Kootie accidentally inhales the ghost of Thomas Edison, he finds that all the factions of Los Angeles' occult underground are after him, determined to kill him and get Edison's powerful ghost for themselves. Aided by Edison's confused and irascible ghost, Kootie flees--and finds himself dodging perils natural and supernatural in the gritty alleys and trainyards of a Los Angeles that tourists never see. From the slums around the L.A. River, to the abandoned Houdini mansion in the Hollywood Hills, to a final dramatic confrontation on the haunted ocean liner Queen Mary docked in Long Beach, Expiration Date is a heart-stopping supernatural adventure from one of fantasy fiction's most original talents. About Tim Powers: "Powers writes in a clean, elegant style that illuminates without slowing down the tale. . . . He] promises marvels and horrors, and delivers them all."--Orson Scott Card ". . . immensely clever stuff.... Powers' prose is often vivid and arresting . . . All in all, Powers' unique voice in science fiction continues to grow stronger."--Washington Post Book World "Powers is at heart a storyteller, and ruthlessly shapes his material into narrative form."--The Encyclopedia of Science Fiction "On Stranger Tides . . . immediately hooks you and drags you along in sympathy with one central character's appalling misfortunes on the Spanish Main, and] escalates from there to closing mega-thrills so determinedly spiced that your palate is left almost jaded."--David Langford "On Stranger Tides . . . was the inspiration for Monkey Island. If you read this book you can really see where Guybrush and LeChuck were -plagiarized- derived from, plus the heavy influence of voodoo in the game. . . . the book] had a lot of what made fantasy interesting . . ."--legendary game designer Ron Gilbert "Powers's strengths are] his originality, his action-crammed plots, and his ventures into the mysterious, dark, and supernatural."--Los Angeles Times Book Review " Powers' work delivers] an intense and intimate sense of period or realization of milieu; taut plotting, with human development and destiny . . . and, looming above all, an awareness of history itself as a merciless turning of supernatural wheels. . . . Powers' descriptions . . . are breathtaking, sublimely precise . . . his status as one of fantasy's major stylists can no longer be in doubt."--SF Site

Tim Powers won the World Fantasy Award twice for his critically acclaimed novels Last Call and Declare. Declare also received the International Horror Guild Award. His novel On Stranger Tides inspired the Monkey Island video game series and was sold to Disney for the movie franchise installment Pirates of the Caribbean: On Stranger Tides. His book The Anubis Gates won the Philip K. Dick Award and is considered a modern science fiction classic and a progenitor of the Steampunk genre. Powers won the Dick Award again for straight science fiction post-apocalypse novel Dinner at Deviant's Palace. Many of his novels, such as Last Call, and Alternate Routes, are so-called "secret histories," which use real historical events in which supernatural and metaphysical elements influence the story in weird and compelling manners. Powers grew up in Southern California and studied English at Cal State Fullerton, where he met frequent collaborators James Blaylock and K.W. Jeter, as well as renowned science fiction author Philip K. Dick, who became a close friend and mentor. Powers is a practicing Catholic who claims "stories are more effective, and more truly represent the writer's actual convictions, when they manifest themselves without the writer's conscious assistance. I concern myself with my plots, but I let my subconscious worry about my themes." Powers still resides in Southern California with his wife, Serena.
Loading...
or
Not Currently Available for Direct Purchase