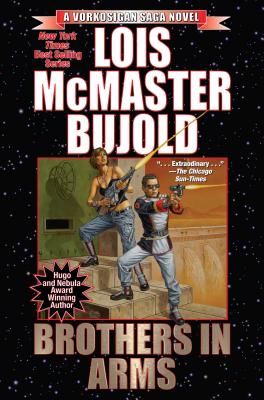 Miles Vorkosigan is having enough trouble keeping his two identities separate—the charismatic Admiral Naismith of the Denarii Mercenary Fleet and a Vor lord of the Barrayan aristocracy—when assassination attempts begin. But are his enemies after Miles Naismith or Lord Miles Vorkosigan? As if things weren't bad enough, the problem of split identities becomes even more confused when a clone of Miles is discovered . . .

About Lois McMaster Bujold’s Vorkosigan Saga:
"The pace is breathless, the characterization thoughtful and emotionally powerful, and the author's narrative technique and command of language compelling. Highly recommended."—Booklist

"[The Warrior's Apprentice] would work just fine . . . as the introduction to the series as a whole. I suspect that anybody who reads one will be as charmed as I was and want to pick up the rest."—SF Site

"If you love solid space opera rooted in strong character, you can't go wrong . . . The Warrior's Apprentice already displays the craft and the heart which would soon make Lois McMaster Bujold one of the most feted talents in SF."—SF Reviews

About Vorkosigan series entry Diplomatic Immunity:
“Bujold is adept at world-building and provides a witty, character-centered plot, full of exquisite grace notes . . . fans will be thoroughly gripped and likely to finish the book in a single sitting.”—Publishers Weekly