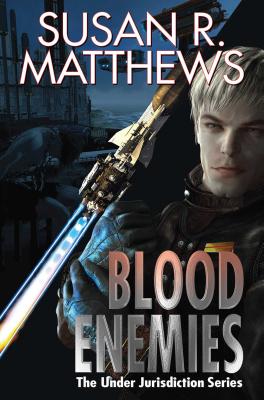 Andrej Koscuisko is a former Fleet Medical Officer for the enormous totalitarian star empire, the Jurisdiction. But when he served in the Fleet, Andrej’s real job was not medicine, but to act as a torturer. Years ago, he left that life behind. But now The Angel of Death, a savage terrorist organization, means to capture the system he calls home. The only way to bring down an organization that has slain whole systems of men, women, and children is for Andrej to embrace the savagery in his own heart and once again take on the role of Judicial torturer.

"A very satisfying entry in a very scary series!"—Janis Ian

Susan R. Matthews has been living with protagonist Andrej Koscuisko of her “Under Jurisdiction” series for a very long time (in a manner of speaking).  Her wife is getting pretty tired of it, too, but he was there first.  Maggie and Susan have only been married for thirty-seven years.

Although her own branch of service during her two-year stint on active duty was Medical Administration (where being constantly mistaken for a nurse just because she was a female officer was a constant irritation – tells you how long ago that was), she has recently immersed herself in the history of German U-boats in World Wars I and II.  In the absence of new English-language books on the subject she considers that her next logical step is to learn to read German.
or
Not Currently Available for Direct Purchase
Copyright © 2020 American Booksellers Association