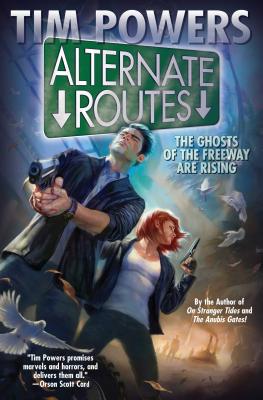 Something weird is happening to the Los Angeles freeways—phantom cars, lanes from nowhere, and sometimes unmarked offramps that give glimpses of a desolate desert highway—and Sebastian Vickery, disgraced ex-Secret Service agent, is a driver for a covert supernatural-evasion car service. But another government agency is using and perhaps causing the freeway anomalies, and their chief is determined to have Vickery killed because of something he learned years ago at a halted Presidential motorcade.

Reluctantly aided by Ingrid Castine, a member of that agency, and a homeless Mexican boy, and a woman who makes her living costumed as Supergirl on the sidewalk in front of the Chinese Theater, Vickery learns what legendary hell it is that the desert highway leads to—and when Castine deliberately drives into it to save him from capture, he must enter it himself to get her out.

Alternate Routes is a fast-paced supernatural adventure story that sweeps from the sun-blinded streets and labyrinthine freeways of Los Angeles to a horrifying other world out of Greek mythology, and Vickery and Castine must learn to abandon old loyalties and learn loyalty to each other in order to survive as the world goes mad around them.

"Tim Powers is always at the top of the list when folks ask about my favorite authors. His weaving mythology and legend into modern stories that revolve around secret histories of our most mundane landmarks never ever disappoints. This introduction to his new characters Sebastian Vickery and Ingrid Castine is wonderful."—BoingBoing

Tim Powers won the World Fantasy Award twice for his critically acclaimed novels Last Call and Declare. Declare also received the International Horror Guild Award. His novel On Stranger Tides inspired the Monkey Island video game series and was sold to Disney for the movie franchise installment Pirates of the Caribbean: On Stranger Tides. His book The Anubis Gates won the Philip K. Dick Award and is considered a modern science fiction classic and a progenitor of the steampunk genre. Powers won the Dick Award again for straight science fiction post-apocalypse novel Dinner at Deviant’s Palace. Many of his novels, such as Last Call and Alternate Routes, are so-called “secret histories,” which use real historical events in which supernatural and metaphysical elements influence the the story in weird and compelling manners. Powers grew up in Southern California and studied English at Cal State Fullerton, where he met frequent collaborators James Blaylock and K.W. Jeter, as well as renowned science fiction author Philip K. Dick, who became a close friend and mentor. Powers is a practicing Catholic who claims “Stories are more effective, and more truly represent the writer’s actual convictions, when they manifest themselves without the writer's conscious assistance. I concern myself with my plots, but I let my subconscious worry about my themes.” Powers still resides in Southern California with his wife, Serena.
Loading...
or
Not Currently Available for Direct Purchase