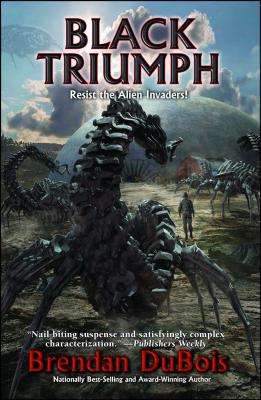 The conclusion to Brendan DuBois's Dark Victory alien-invasion trilogy. Bestselling and award-winning author Brendan DuBois proves that even in the most desperate of times, there are still men and women alive who will take up weapons to defend what is theirs.

More than ten years ago, the alien Creepers arrived in Earth’s orbit and started a war that was a slaughter for humanity.   Nuclear weapons detonated in the atmosphere destroyed all electronic devices, asteroids dropped into oceans and lakes swamped cities with artificial tsunamis, and the nearly invulnerable Creepers arrived on Earth, going forth from their dome bases to attack civilians and military units at will.

Sixteen-year-old Randy Knox, a newly minted lieutenant in the U.S. Army, has been fighting the Creepers since he was twelve.  He has seen friends, family members and fellow soldiers killed by the Creepers, and he is tired of war.  At one point, it seemed the war was over when the aliens’ orbital battle station had been destroyed.

But a second Creeper orbital battle station has arrived.

The war no longer seems to be over, and while returning to his home unit, Randy’s convoy is ambushed.  Separated from his fellow soldiers and his K-9 companion Thor, Randy faces the ultimate horror of every American serviceman:  to become a prisoner of war of the aliens.

“Forced into a two-front war fighting both the attacking creepers and saboteurs within his own ranks, Randy learns how far he will go to protect those he loves and defeat the Creeper menace. Red Vengeance is a worthy follow-up to Dark Victory and excellent and entertaining stand-alone. If you like action science fiction you will enjoy Brendan DuBois’ latest.”—Daily News of Galveston County

"DuBois (Resurrection Day) has written a great series opener for a range of readers. The adolescent characters make this an especially solid choice for teens with an interest in apocalyptic and disaster fiction."—Library Journal

"Ambitious . . . nail-biting suspense and satisfyingly complex characterization . . . the contrast between DuBois’s world and our own is stark and well drawn."—Publishers Weekly

"A page-turner of an alien invasion novel with fine world-building and characterization. DuBois writes with a strong hand, keeping the fighting and military side of things gritty. From the weapons to the people, Dubois gets it right."—Steve Miller, cocreator of the best-selling Liaden Universe® series

Brendan DuBois is the award-winning author of over twenty novels and more than 120 short stories. His short stories have twice won him the Shamus Award from the Private Eye Writers of America, and have also earned him three Edgar Award nominations. He has recently collaborated with New York Times best-selling author James Patterson on several novellas for Patterson's Bookshots. Brendan lives in New Hampshire. A former Jeopardy! champion, he also appeared on—and won—the game show The Chase.
or support indie stores by buying on
Copyright © 2020 American Booksellers Association