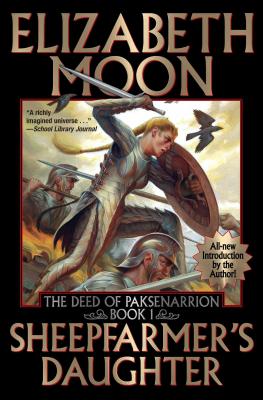 The Paksenarrion Trilogy—Back in Print!

Paksenarrion Dorthansdotter may be the daughter of a humble sheep farmer in the far north end of the kingdom, but she dreams of so much more. After refusing her father’s orders to do the sensible thing and marry the pig farmer down the road, Paks, runs away to join a band of mercenaries, dreaming of daring deeds and military glory. But life in the army is different than she imagined, and her daydreams at first seem to be turning to nightmares. But Paks refuses to let her dreams die—and does her duty with honor and integrity. Her path is an arduous one, but it will transform her into a hero remembered in songs, chosen by the gods to restore a lost ruler to his throne.

The Compton Crook Award-winning first novel from Nebula-winning author Elizabeth Moon. The first in the Paksenarrion Trilogy—now with an all-new introduction by the author.

When not writing, Moon enjoys photographing wildlife and native plants, singing in a choir, cooking for friends and family, drawing, reading, knitting, and lying in a hammock pretending to be plotting the next book. She and her husband subscribe to and read several science and medical journals (since they're not near any academic libraries.) She lives in Florence, Texas, with her husband and son.
Loading...
or
Not Currently Available for Direct Purchase