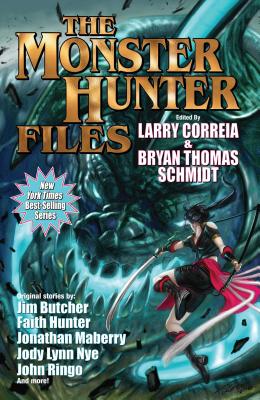 For well over a century, Monster Hunter International has kept the world safe from supernatural threats small and large—and in some cases very, very large. Now, join us as MHI opens their archives for the first time. From experienced Hunters on their toughest cases, to total newbies' initial encounters with the supernatural, The Monster Hunter Files reveals the secret history of the world's most elite monster fighting force.

Discover what happened when Agent Franks took on the Nazis in World War Two. Uncover how the Vatican’s Combat Exorcists deal with Old Ones in Mexico. And find out exactly what takes place in a turf war between trailer park elves and gnomes. From the most powerful of mystical beings to MHI’s humble janitor, see the world of professional monster hunting like never before.

“This themed anthology . . . will appeal to a wide range of readers, who will appreciate the diversity of stories . . . a solid introduction to a classic genre.”—Kirkus

“Editor Schmidt adds grandmasters to a mix of newer established names and balances the tragic with the humorous.”—Publishers Weekly

“In this well-built anthology, seventeen original stories cut to the heart of military fantasy, diving directly into the most exciting moments of dramatic bravery, grand battles, and life-changing heroism. . . . Readers who prefer to cut straight to the action, but want more depth than pure hack-and-slash, will find these offerings appealing.”—Publishers Weekly

“An inventive and thought-provoking set of tales that capture the bravery and terrors of battle. Carries the banner of military fantasy proudly.”—John Marco, author of The Bronze Knight Series

About The Raygun Chronicles, edited by Bryan Thomas Schmidt:

“Fans of sf should enjoy this stylistically varied homage to a genre as old as the fiction . . . ”—Library Journal

Larry Correia is an award-winning competitive shooter, a movie-prop-gun master, and was an accountant for many years. He is the creator of the Wall Street Journal and New York Times best-selling Monster Hunter series, with first entry Monster Hunter International, as well as urban fantasy hardboiled adventure saga, the Grimnoir Chronicles, with first entry Hard Magic, and epic fantasy series The Saga of the Forgotten Warrior, with first entry Son of the Black Sword. Correia lives in Utah with his wife and family.