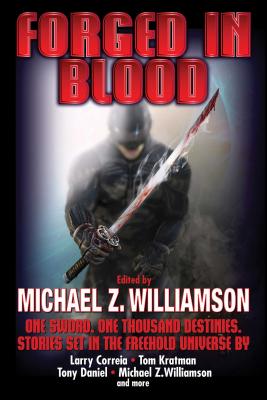 WARRIORS AND SOLDIERS TIED TOGETHER THROUGHOUT TIME AND SPACE

From the distant past to the far future, those who carry the sword rack up commendations for bravery. They are men and women who, like the swords they carry, have been forged in blood. These are their stories.

In medieval Japan, a surly ronin is called upon to defend a village against a thieving tax collector who soon finds out it's not wise to anger an old, tired man. In the ugliest fighting in the Pacific Theater, an American sergeant and a Japanese lieutenant must face each other, and themselves. A former US Marine chooses sides with outnumbered Indonesian refugees against an invading army from Java. When her lover is stolen by death, a sergeant fighting on a far-flung world vows vengeance that will become legendary. And, when a planet fragments in violent chaos, seven Freeholders volunteer to help protect another nation's embassy against a raging horde.

Michael Z. Williamson is retired military, having served twenty-five years in the U.S. Army and the U.S. Air Force. He was deployed for Operation Iraqi Freedom and Operation Desert Fox. Williamson is a state-ranked competitive shooter in combat rifle and combat pistol. He has consulted on military matters, weapons and disaster preparedness for Discovery Channel and Outdoor Channel productions and is Editor-at-Large for Survivalblog, with 300,000 weekly readers. In addition, Williamson tests and reviews firearms and gear for manufacturers. Williamson’s books set in his Freehold Universe include Freehold, The Weapon, The Rogue, Better to Beg Forgiveness . . ., Do Unto Others . . ., and When Diplomacy Fails . . .. He is also the author of time travel novel A Long Time Until Now, as well as The Hero—the latter written in collaboration with New York Times best-selling author John Ringo. Williamson was born in England, raised in Liverpool and Toronto, Canada, and now resides in Indianapolis with his children.
or
Not Currently Available for Direct Purchase
Copyright © 2020 American Booksellers Association