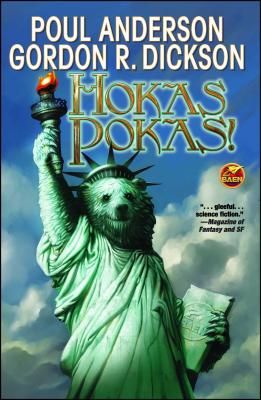 Two Legends of SF Team Up! Poul Anderson and Gordon R. Dickson present the Hokas, teddy-bear-like aliens who take the stories of Earth very seriously, in this classic of humorous SF.

When a human thinks he's Napoleon Bonaparte, it's time to get out a straightjacket. But when a Hoka thinks he's Napoleon Bonaparte, you'd better believe it! Particularly since there'll be hundreds of other Hokas around who know for a fact that they're the French Army, mon amis, even if they're on another planet lightyears away from Earth, and the forces they're facing aren't the British but very nasty warlike aliens who by all reason should be expected to make mincemeat out of the Hokas.

But when it comes to Hokas, reason does not compute. These friendly, fuzzy aliens who resemble large teddy bears have a very vivid imagination and have never quite grasped the difference between human fiction and reality, or (in the present case), between past history and the much later and rather different present. Always bet on the Hokas. Even when a young lad and his Hoka tutor find themselves stuck on a planet where they seem to be scheduled to fulfill and ancient (and lethal!) prophesy that neither of them had ever heard of until now. Hokas as usual find that reality is merely optional and the good guys—and bears—always win, quicker than you can say HOKAS POKAS!

Poul Anderson was one of the most prolific and popular writers in science fiction. He won the Hugo Award seven times and the Nebula Award three times, as well as the Grand Master Award of the Science Fiction Writers of America.  With a degree in physics, and a wide knowledge of other fields of science, he was noted for building stories on a solid foundation of real science, as well as for being one of the most skilled creators of fast-paced adventure stories. He was author of over a hundred novels and story collections, and several hundred short stories, as well as several mysteries and nonfiction books.