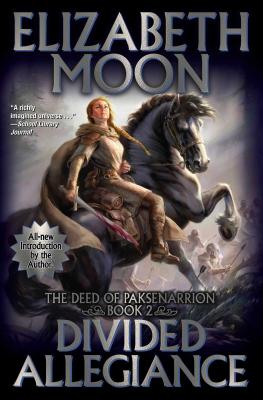 FROM SHEEPFARMER’S DAUGHTER TO WARRIOR

Once a sheepfarmer’s daughter, now a seasoned veteran, Paksenarrion has proven herself a fighter. Years with Duke Phelan’s Company taught her weaponry, discipline, and how to react as part of a military unit.

Now, though, Paks feels spurred to a solitary destiny. Against all odds she is accepted as a paladin-candidate by the fellowship of Gird. Years of study will follow, for a paladin must be versed in diplomacy and magic as well as the fighting arts. But before she is fully trained, Paks is called on her first mission: to seek out the fabled stronghold of Luap far to the west. The way is long, the dangers many—and not even the Marshal-General of Gird can say whether glory or ruin awaits.

When not writing, Moon enjoys photographing wildlife and native plants, singing in a choir, cooking for friends and family, drawing, reading, knitting, and lying in a hammock pretending to be plotting the next book. She and her husband subscribe to and read several science and medical journals (since they're not near any academic libraries.) She lives in Florence, Texas, with her husband and son.
Loading...
or support indie stores by buying on