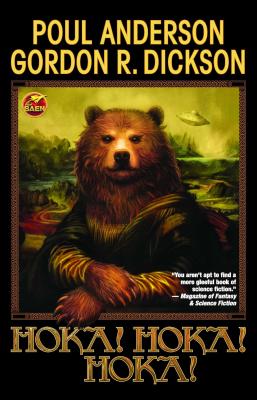 THE HOKAS ARE BACK IN THIS CLASSIC OF HUMOROUS SF FROM POUL ANDERSON AND GORDON R. DICKSON.

YOU CAN’T KEEP A GOOD HOKA DOWN!

The Interbeing League had been formed to make contact with new intelligent races in the galaxy and offer them membership. But when the League encountered the Hokas, furry creatures strongly resembling the teddy bears of Earth, the League’s agent, Alexander Jones, could have been excused for wishing he had a simpler assignment than making sense out of the Hokas—such as singlehandedly stopping an interstellar war.

Not that the fuzzy aliens were unfriendly. In fact, they loved everything about humans, and adopted various Terran cultures wholesale and in every little detail—but with a bit of confusion about the differences between fact and fiction. So, if the Hokas suddenly started acting out the parts in a rip-roaring, shoot-em-up Western, or brought to life the London of Sherlock Holmes, complete with a pipe-puffing, deerstalker-wearing Hoka, or suddenly decided to fly the Jolly Roger and lead a life of adventure and piracy on the high seas, matey—well, that was to be expected. And as the Hokas threw themselves wholeheartedly into progressively wilder worlds from Terran history and fiction, Jones could be excused for feeling that his grip on reality was hanging by a single, thin, increasingly frayed thread.

Praise for the Hokas stories:

“You aren’t apt to find a more gleeful book of S.F.”—The Magazine of Fantasy & Science Fiction

“. . . the funniest s-f ever written.”—A Reader’s Guide to Science Fiction

Poul Anderson was one of the most prolific and popular writers in science fiction. He won the Hugo Award seven times and the Nebula Award three times, as well as the Grand Master Award of the Science Fiction Writers of America.  With a degree in physics, and a wide knowledge of other fields of science, he was noted for building stories on a solid foundation of real science, as well as for being one of the most skilled creators of fast-paced adventure stories. He was author of over a hundred novels and story collections, and several hundred short stories, as well as several mysteries and nonfiction books.