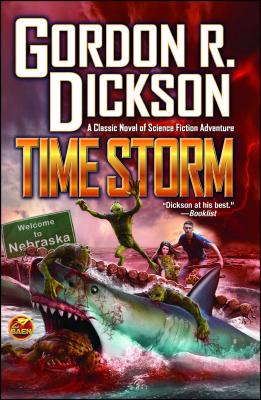 A MOST UNIQUE APOCALYPSE from Grand Master Gordon R. Dickson

RIDERS ON THE TIME STORM

The time storm had devastated the Earth, and all but a small fraction of humankind has vanished. In the rubble of the world, three survivors have formed an unlikely alliance: Marc Despard, determined to find a way to stop the time storm; a leopard, dazed by the storm and following after Despard like a kitten; and a young woman with an unbreakable bond to the leopard.

Now, Marc searches relentlessly for a clue to the nature of the storm, not guessing that the time storm threatens not just the Earth but the entire universe—and that his two companions were the only hope of reversing the distortions in the fabric of the cosmos that were about to bring an end to all of space and time . . .

"Dickson at his best. . . . One of the notable science fiction novels of the year."—Booklist

"One of those rare books that holds your attention constantly. The suspense at some points is almost unbearable, leaving the reader breathless and glad the crisis has passed."—New Orleans Times-Picayune

Gordon R. Dickson (1923-2001) was one of the most prolific and popular science fiction writers of the 20th Century, frequently nominated for the Hugo and Nebula Awards and winning three Hugos and one Nebula. He also received the Jupiter, August Derleth, and Skylark Awards, and was inducted into the Science Fiction Hall of Fame. He published nearly fifty solo novels, as well as several collaborations with such SF masters as Poul Anderson, Ben Bova, Keith Laumer, and Harry Harrison, and over one hundred and fifty short stories, novelettes, and novellas. His most popular works were the novels and shorter pieces in the Childe cycle (which included the Dorsai stories). Also very popular was his Dragon series of fantasy novels, which began with the award-winning The Dragon and the George, and continued for a total of nine novels, and the humorous Hoka stories, co-authored with Poul Anderson, available from Baen Books.
Loading...
or
Not Currently Available for Direct Purchase